Chavin de Huantar, visiting the most important pilgrimage center of the Andean world

The archeological site of Chavin de Huantar represents one of the most impressive achievements of the ancient Andean world. It is celebrated for its monumental architecture and exceptional stone carving, which features tenon heads, a stele, and other stones carved with incredibly elaborate anthropomorphic figures. Chavin de Huantar is located in the southwest region of the Cordillera Blanca about a two-hour drive from Huaraz via a paved road.

Chavín de Huantar is very old. The earliest constructions date to at least 3000 years ago and the site appears to have been active for about 700 years. It was, in fact, long considered to be the “cradle of South American civilization” until somewhat similar coastal discoveries with even older dates cast doubt on that idea. Regardless of whether the iconography is of coastal or highland origin, Chavin remains the central focal point of a culture that was very widespread and was doubtless a very important religious and administrative center. 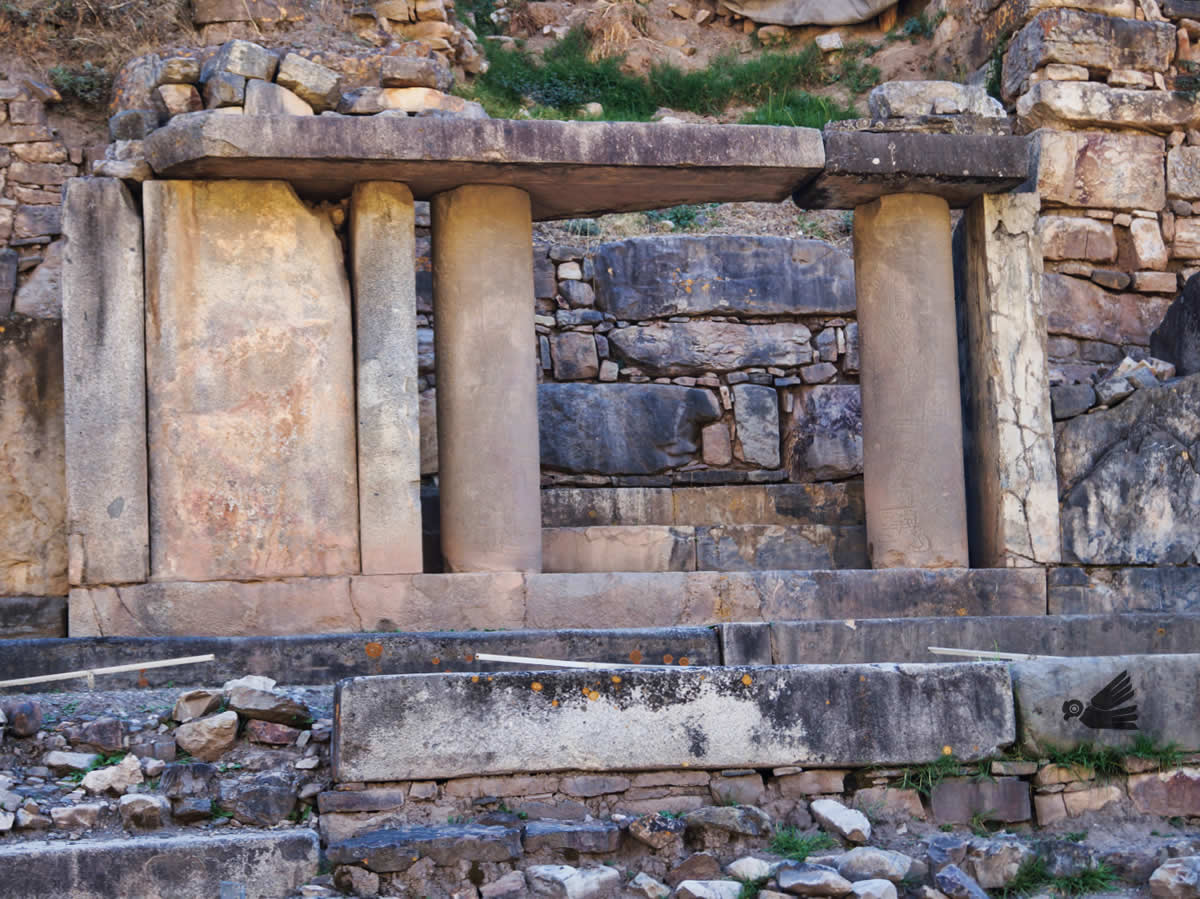 During its existence, the influence of Chavin spread throughout the northern Peruvian highlands in the form of monochrome ceramics and stone carvings in the Chavin style. The archeologist Luis Lumbreras has proposed that Chavin was likely a very important destination for religious peregrinations. This was based on evidence that it was regularly visited by people from the coast, jungle, and various distant highland regions.

The earliest historical account we have of Chavin de Huantar is from 1620 and comes to us from Antonio Vázques de Espinoza. He compares Chavin to Rome or Jerusalem stating that, even in his day, “the Indians arrived at Chavin to present offerings and make sacrifices because there was a devil that lived there who was an oracle and he was visited by people from all parts of the kingdom.”

Location of the archaeological site

Chavin de Huantar was built between the Mosna and Huachecsa Rivers (tributaries of the Marañon River). It is thought that the name is of Quechua origin and related to the word, “chawpin”, which means “center” or “in the middle”. This is strangely appropriate as Chavin is indeed located about halfway between the coast and the jungle. It is located between 77° 16’11” west longitude and 08° 58’15” south latitude.

The construction of the Chavin temples was surprisingly sophisticated. The massive truncated pyramids are basically earthen mounds with facades of well-fitted stones. Buried within these structures are labyrinths of subterranean galleries and drainage channels that emit mysterious roars when water runs through them.

According to the archeologist John W. Rick, the interplay of these complex architectural spaces, elaborate decorations, light, sound, and ingested psychedelic substances had the effect of astonishing the followers of their religion. It is thought that Chavin had a shamanic culture and that the idea of duality was very important to them. That being said, scientific studies continue and you can rest assured that Chavin will continue to surprise us for a long time to come. 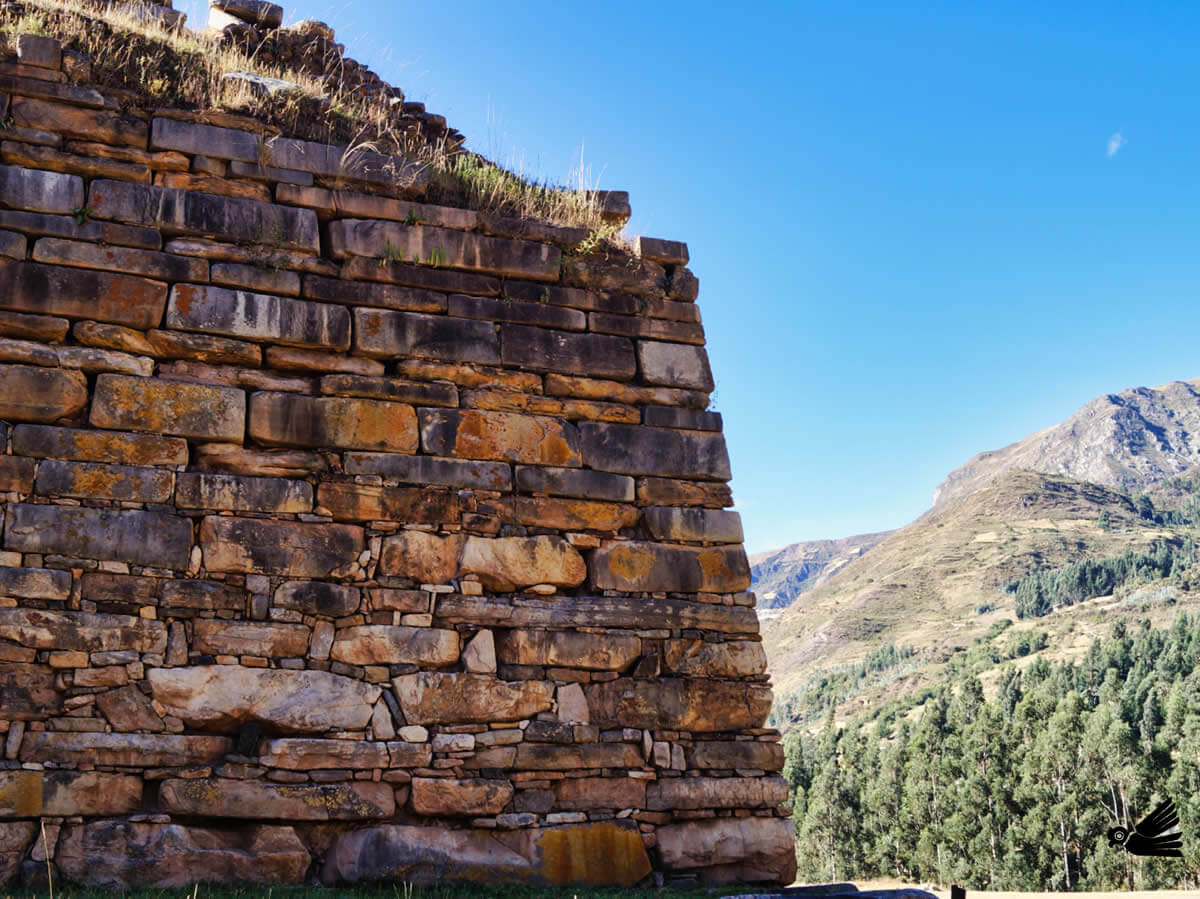 What is there to see in Chavin de Huantar?

Chavin de Huantar is a large archeological site with much to explore. There are several significant structures, but only the largest of these retains the majority of its stone facing; we find plazas, underground galleries, and many interesting carved stones to visit. There is also a site museum, which is located on the other side of the modern town of Chavín, about ten minutes from the archeological complex. The museum has on display many artifacts and stone carvings associated with the ruins. Below are brief descriptions of the major attractions Chavin de Huantar has to offer:

Lies directly in front of the New Temple’s Black and White Portal. It is flanked by two large platforms, and features several staircases. This was clearly a site for rituals with enough space for a relatively large public gathering.

Is the largest structure in Chavin de Huantar. It has the rough shape of an immense truncated pyramid with walls comprised of well-crafted ashlars (carved stone blocks). It was originally decorated by a large number of tenon heads of which only one remains in situ. Within the New Temple are several subterranean galleries that are open to the public.

The Black and White Portal

Is a sort of ceremonial gateway made of decorated columns topped with stone lintels, which sits on a platform facing the Great Sunken Plaza. The most unique aspect of the portal is that the stones on the right side are dark colored and the ones of the left are light colored. Both the columns and the lintels are carved with bas-relief dragon-like figures, both male and female. All of this relates to the sense of duality that pervades our understanding of the Chavin cosmic vision. 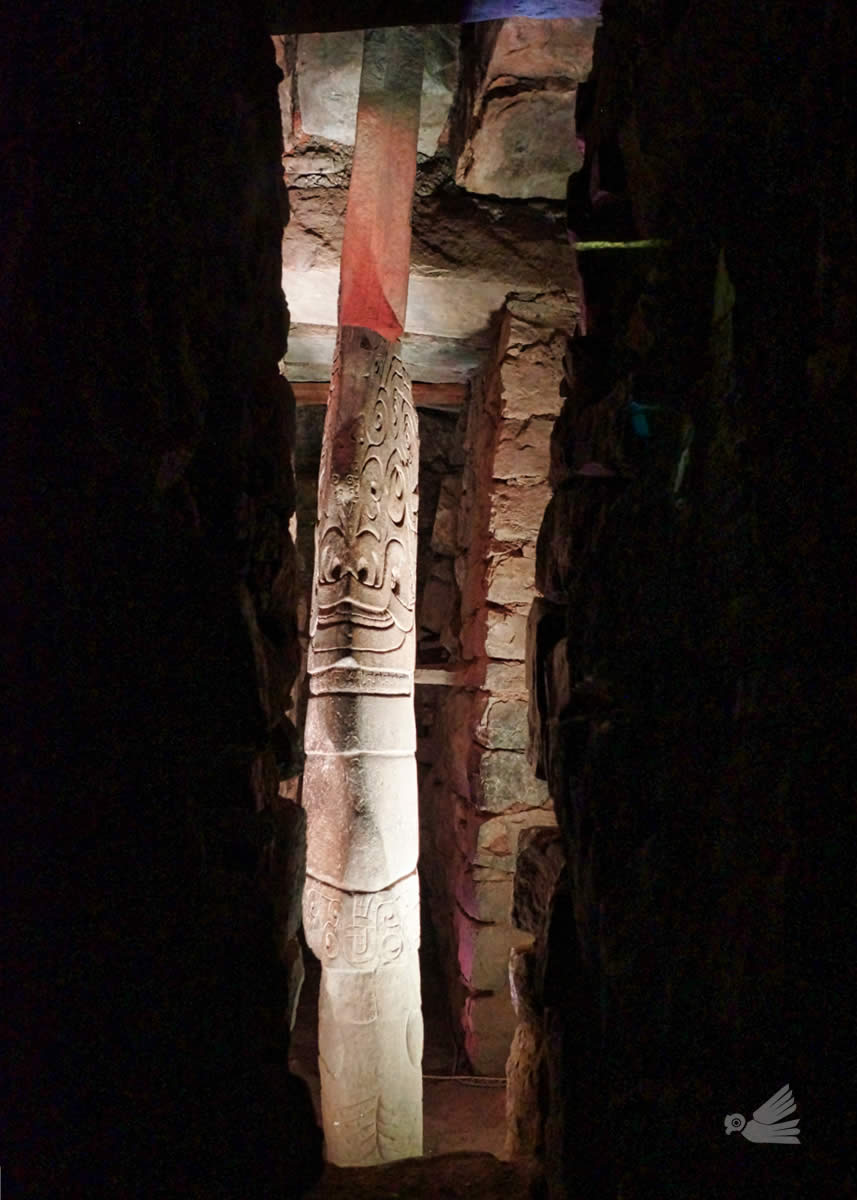 Is a small plaza located directly in front of the Old Temple. It was decorated with carved stone slabs, the best known of which features a god holding what is clearly a hallucinogenic San Pedro cactus (this artifact is currently on display in the Chavin Museum). Experts believe that the Circular Plaza was the site of ritual activities.

Has traditionally been thought of as the earliest construction in Chavin, although recent studies have suggested that this is not actually the case. It’s interior is honeycombed with galleries including the most important gallery in Chavin, the “Gallery of the Lanzón.”

May well be the most important stone sculpture in South America. It is the only ancient “deity” that was neither removed nor destroyed by the Spanish, so you can experience it how it was meant to be experienced, in a mysterious dark underground passageway deep in the Old Temple. The Lanzón is spear head shaped and carved from a single huge block of granite. It stands 4.35 meters tall and is sculpted in the image of a terrifying god. It has a cat-like face with ferocious fangs and snakes for hair. Some think that it is a representation of the god Wiracocha.

Are carved stone heads that have a post protruding from the back so that they can be integrated into the masonry of a stone wall. The tenon heads of Chavin are strange representations of humans, cats, snakes, and birds that appear to be in various stages of mystical transformation. Some seemingly show thick mucous running from their noses, which suggests psychedelic drug use. These heads originally decorated the New Temple, but currently, as stated before, only one remains in situ. The majority were lost in a mudslide that destroyed the original site museum in 1945, but many of these have been retrieved over the years and are now safely on display in the modern museum.

Is a 2.52 meter tall stone sculpture that was originally associated with one of the plazas. It is elaborately carved with images of mythical deities and many fruits such as squash and manioc. The original obelisk is currently on display in the museum.

The replica of the Stella Raimondi

Is a large granite slab (1.98 m tall, 74 cm wide, and 17 cm thick) carved with the iconic image of an anthropomorphic deity. It is cat-like in some aspects wearing an extraordinary headdress of fanged faces and snakes and clutching an elaborately carved staff in each clawed hand. There is reason to believe that this is an early representation of the god Wiracocha. Unfortunately, the original Stele Raimondi was carried off by its namesake Antonio Raimondi to Lima where it remains to this day and is on view in the Museo Nacional de Arqueología, Antropología e Historia del Perú, but there is an acceptable copy on display in the Chavin museum.

Is a curious flattened limestone boulder with several bowl shaped depressions. These may have been used for ceremonial purposes and the seven depressions themselves have been associated with the Pleiades. 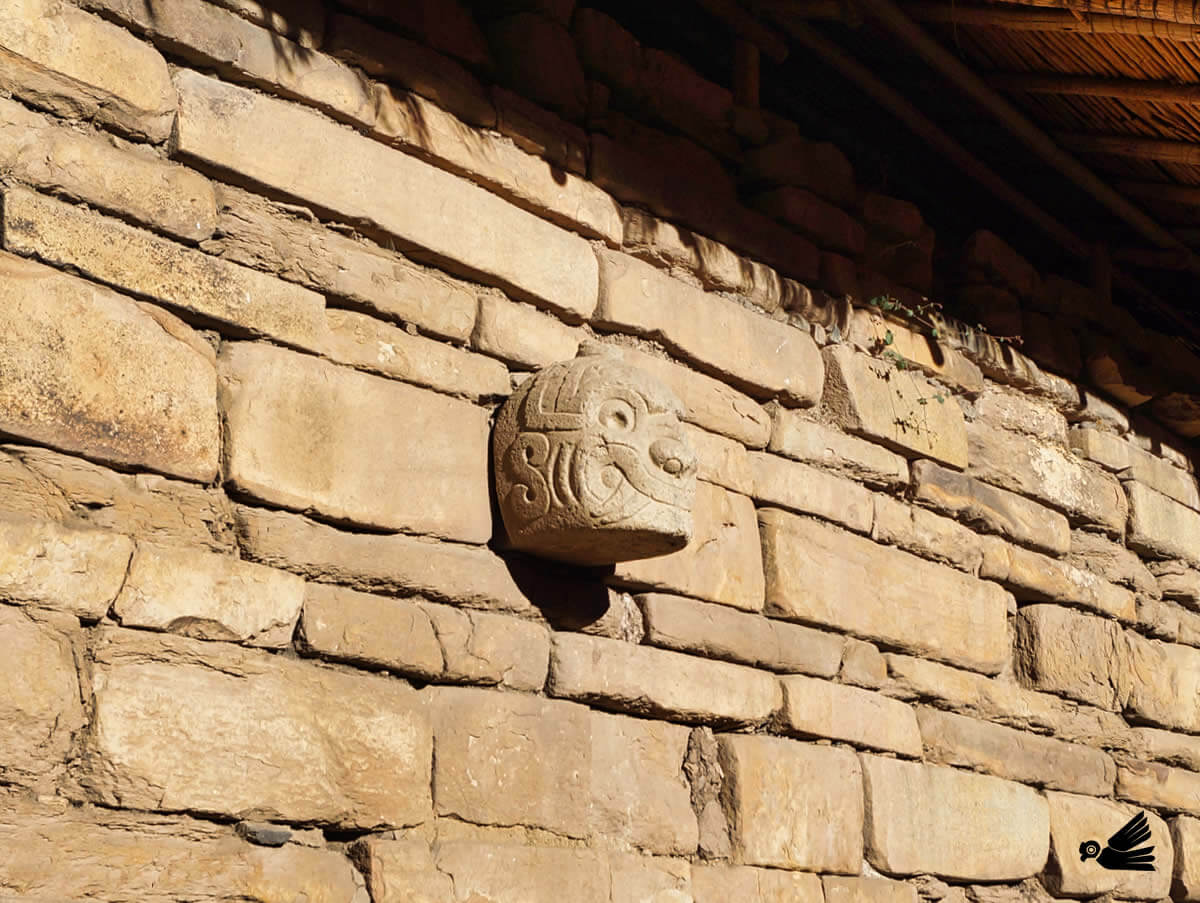 How to visit the Chavin de Huantar archeological complex:

There are two ways in which people generally visit Chavin de Huantar.

There are one-day excursions from Huaraz that visit the Chavin de Huantar Monument. These are full-day trips that depart from Huaraz early in the morning. Along the route they first make a stop at Querococha, which is an attractive high altitude lake; they then ascend to the Cahuish Tunnel at 4516 masl, cross to the east side of the Cordillera Blanca and then descend to Chavin, which is at 3137 masl. These excursions visit both the archeological complex and the Museo Nacional de Chavín.

In the days before the modern road, Chavin could only be reached by foot or on horseback via a route that we now know as the Olleros-Chavin Trek. It is a beautiful route that boasts sections of well-preserved so-called “Inca road”, although the trail certainly predates the Incas. There are long sections of raised roadbed built from carefully placed stones, strange retaining walls, and some ancient stone structures as well (tambos).

The route begins on the west side of the Cordillera Blanca in the village of Olleros or nearby Canrey Chico and gently climbs a long valley to Yanashallash Pass (4700 masl). There is then a long descent through high puna and further along you pass through picturesque villages before finally reaching the town of Chavin de Huantar, where you will have time to visit the ruins. The trek has beautiful views of mountains such as: Rurec (5700 masl), Cashan (5686 masl), and Purnahuanca (5563 masl) among others.

Daily hiking times range from three to six hours. Because the traditional route to Chavin de Huantar involves crossing a high pass, it is essential to be properly acclimatized beforehand. 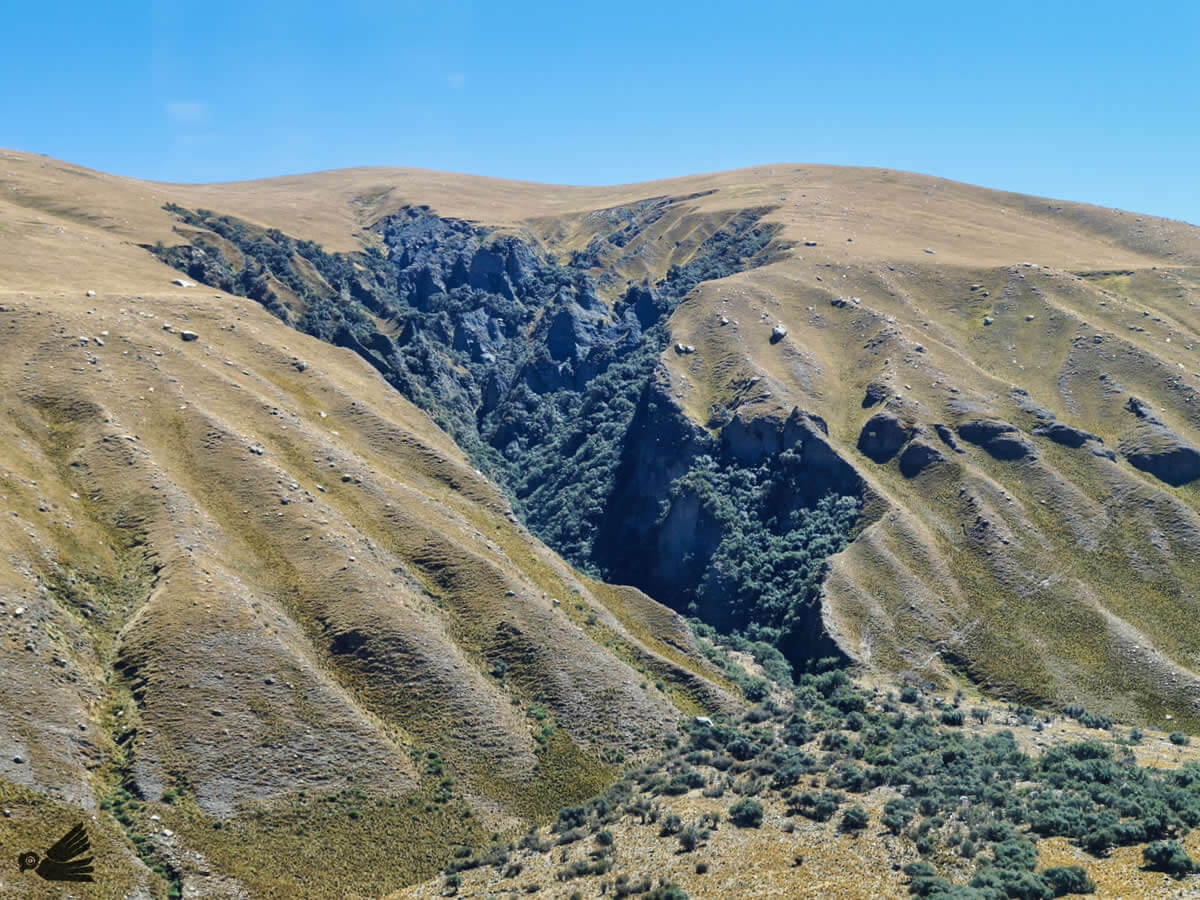 Map of Peru, geological fault, on the way to Chavin de Huantar

The exceptional Chavin Museum is located about ten minutes from the ruins, it was a gift from the Japanese government and opened its doors on July 18, 2008. The museum features 14 exhibition rooms with many tenon heads, beautifully decorated conch shell horns, the Tello Obelisk, 282 ceramic pieces, and many more fascinating object associated with the Chavin culture.

50% rate, for adults over 60 years old, people with disabilities, teachers and people in military service. *

* Applies to visitors residing in the country (Peru) and upon presentation of documents. 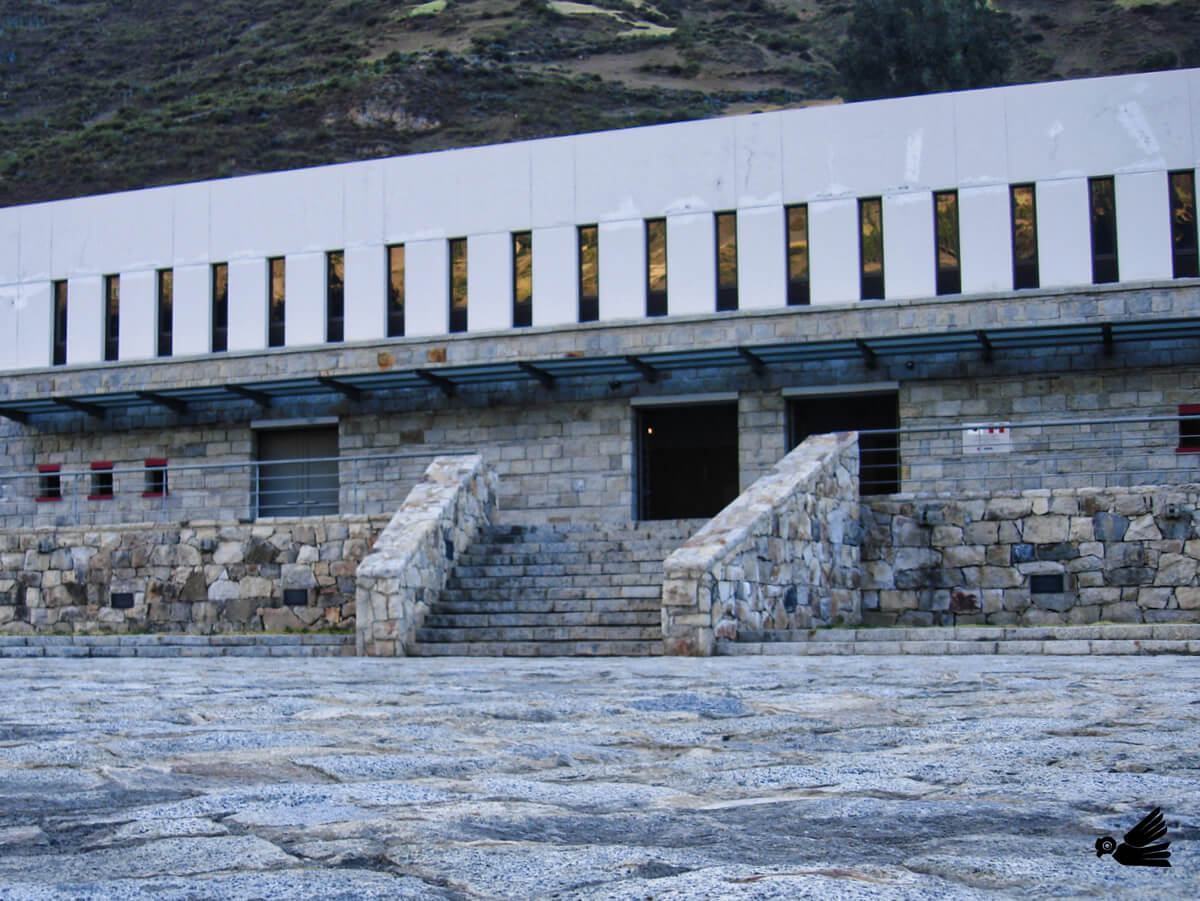 If you have any further questions please feel free to CONTACT US. Our experience and knowledge are at your service.