Ten of the best tourist attractions in the Huaraz region

Huaraz, the capital of the department of Ancash, is located at 3,100 meters above sea level and is the largest city in the Huaylas Valley. It is the center of regional tourism and boasts many hotels, restaurants, and tour companies. Huaraz serves as an excellent base from which to visit many beautiful and interesting attractions, including pre-Hispanic archeological sites (Chavín, Recuay, Huari, and Inca cultures are all represented), colorful lakes (green, blue, and turquoise), viewpoints, high altitude passes between intermontane valleys, and more. These ten best attractions are located in the heart of the Cordillera Blanca and are in most cases easily reached by car or accessible by a short hike. All of the following breathtaking spots can be visited in a one-day tours from Huaraz. 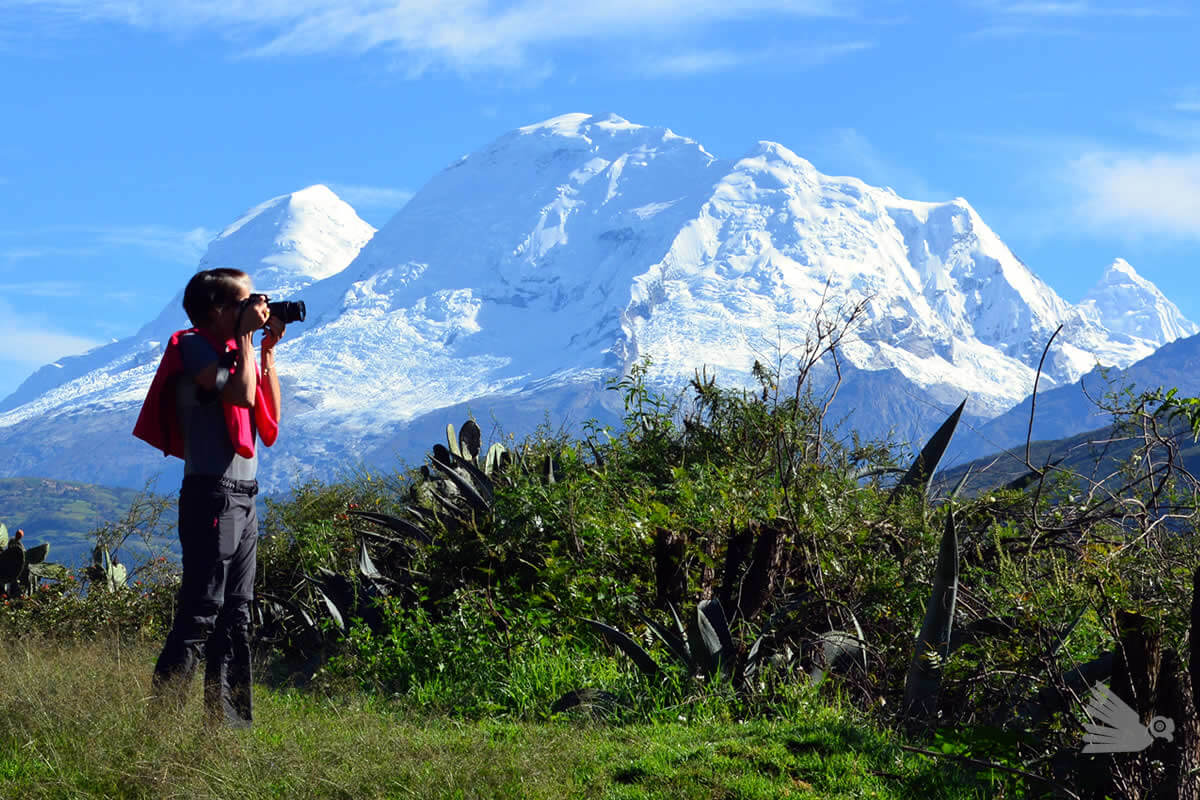 The stunning beauty of the Llanganuco Valley has made this tour world famous and a classic in the Cordillera Blanca and Huascaran National Park. The valley is girded by enormous glaciated peaks with crystalline rivers that feed two lakes: Chinancocha (“female lake” in the native Quechua language) and Orconcocha (“male lake”). It is located 70 km northeast of Huaraz at 3,700 meters above sea level. The trip to Llanganuco is on paved roads until you reach the town of Yungay (well-known for having been obliterated in the 1970 earthquake) where you turn off the main road and continue via a gravel road to the famous Chinancocha Lake. The shores of the lake are populated with forests of beautiful native quenual trees (Polylepis sp.). 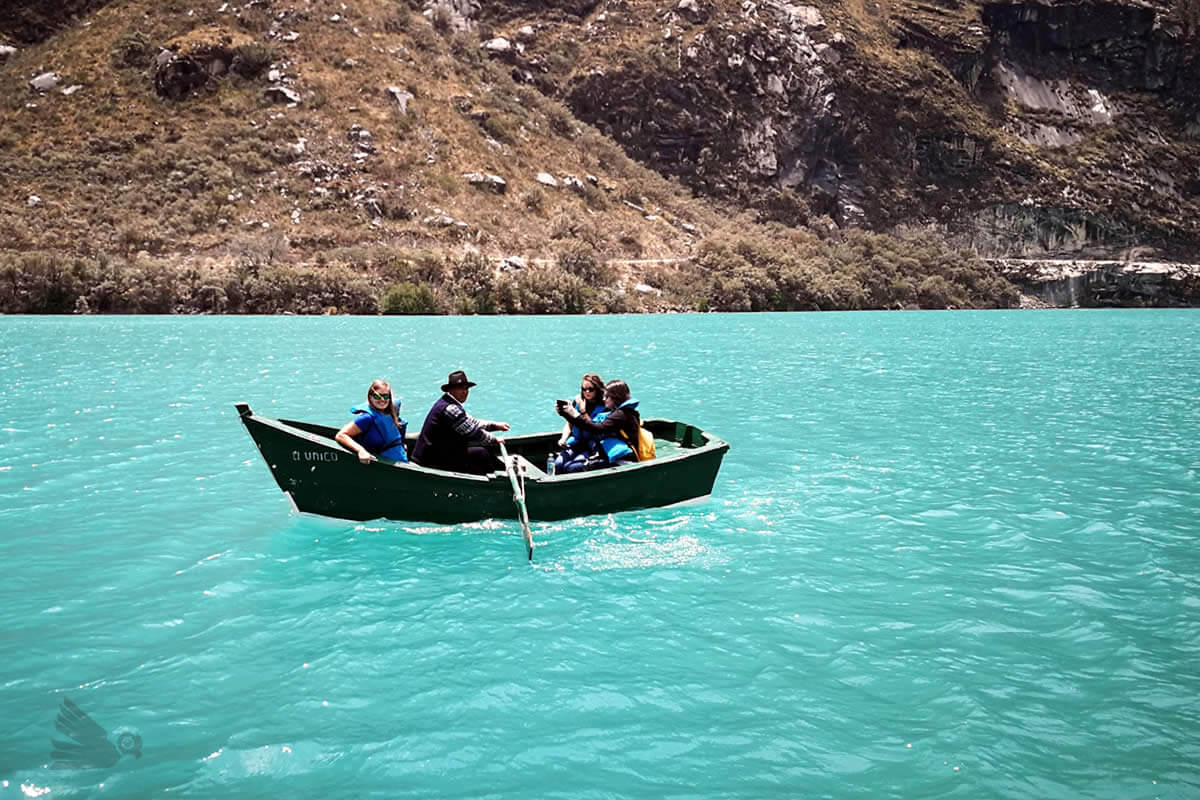 Our ancestors left behind a great deal of evidence of their existence in the form of spectacular archeological ruins. One of the most important of these is an over 3000-year-old site (early horizon 1200 CE – 400 CE) in the town of Chavín de Huantar. The people of this ancient culture were excellent stonemasons who built a large complex consisting of roads, plazas, and impressive temples decorated with tenon heads and containing mysterious subterranean galleries of different sizes, illuminated and ventilated by small ducts. Deep within one of these galleries you can still admire the Lanzón monolith, a 4.54 meter block of granite carved to represent an anthropomorphic god that remains in situ to this day. The town of Chavín also boasts an excellent museum (Museo Nacional de Chavín), which has 14 exhibition rooms housing many artifacts covering the entire ancient history of Chavín. The museum’s collection includes the Tello Obelisk, many tenon heads, a reproduction of the Lanzón, and 282 ceramic items. Chavín is located on the eastern side of the Cordillera Blanca, 105 km from Huaraz. 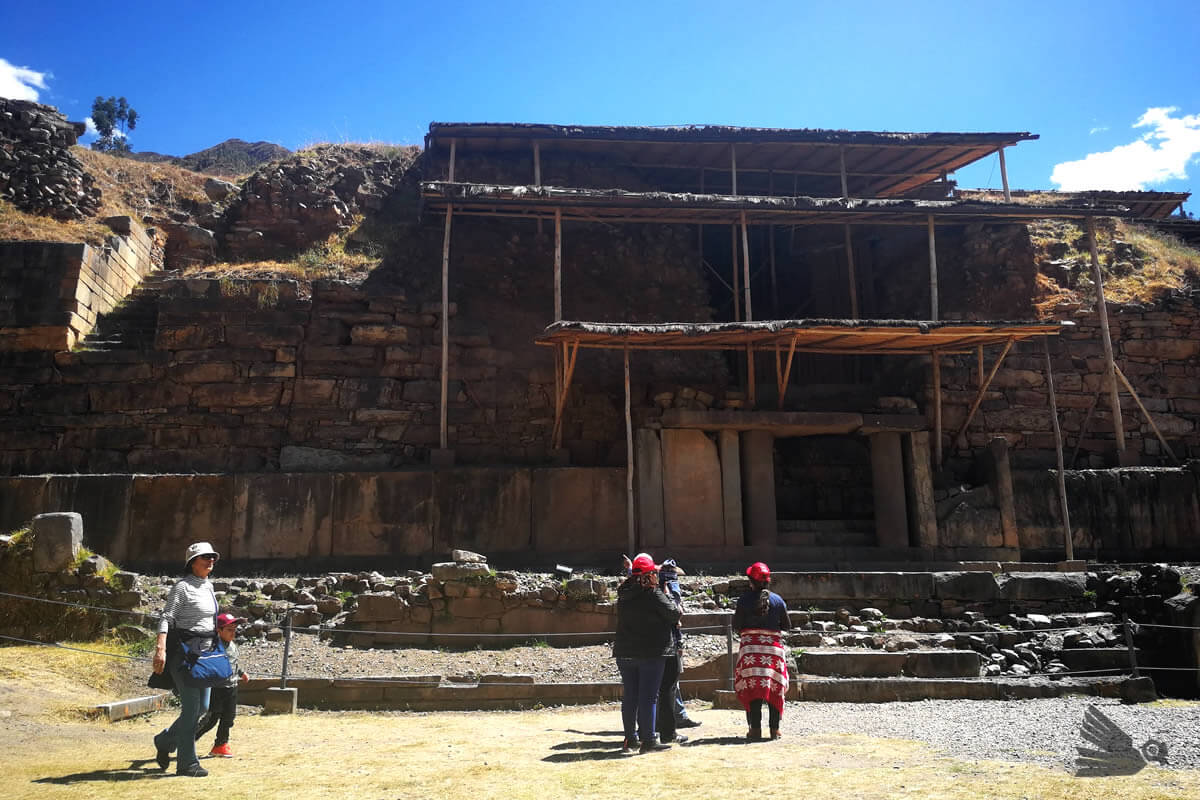 Located 101 km northeast of Huaraz at 4,185 meters above sea level, Lake Parón is a glacial lake fed by runoff from the mountains Huandoy, Artesonraju, Pirámide, Chacraraju, Pisco, Parón and Paria. It is the largest lake in the Cordillera Blanca and an important resource that powers the central hydroelectric station in the Cañon del Pato, which is one of the most important electricity providers in Peru. The one-day tour from Huaraz to Lake Parón includes a short hike to a viewpoint above the lake with an exceptional panorama of the huge glaciers that loom over the valley. 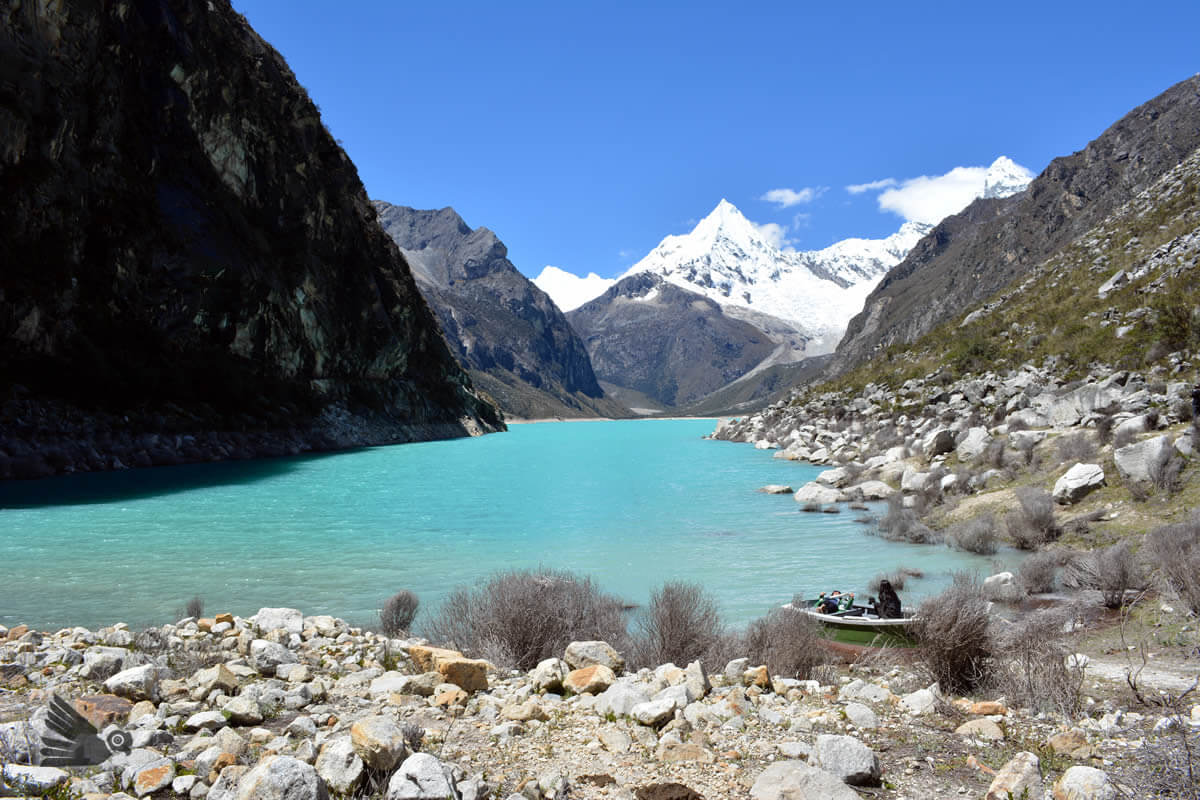 Unlike most lakes in the Cordillera Blanca, which are fed by glaciers, Radian Lake was formed entirely by rainfall. This is a good place to observe birds such as the puna ibis, Andean gull, coots, and ducks. It is very close to Huaraz and offers a short (five km each way) easy hike in a beautiful place. Lake Radián is located at 3,900 meters above sea level and is an ideal choice for a relaxing day in a natural setting with excellent views of the great peaks of the Cordillera Blanca. 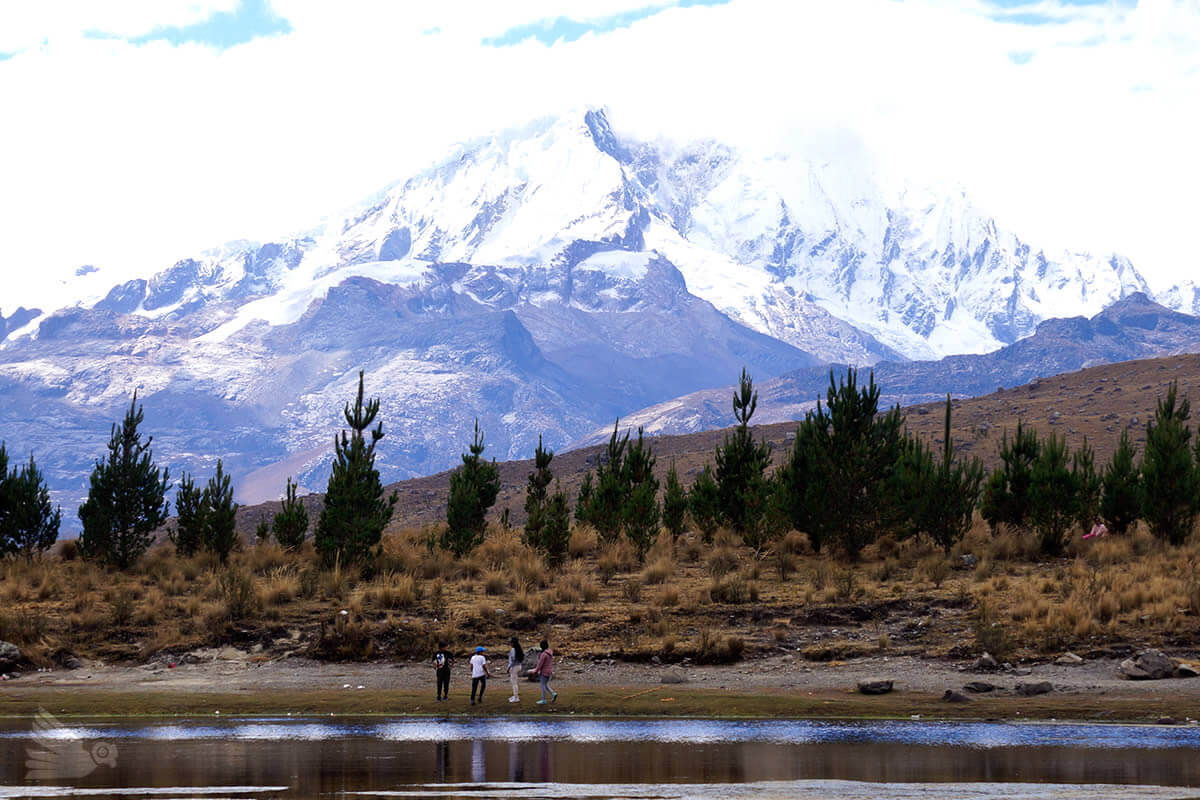 Portachuelo Pass is perched at 4,765 meters above sea level at the upper end of the Llanganuco Valley on the continental divide separating the Pacific and Amazon watersheds. The road was constructed in the 1960s and climbs a long series of switchbacks that allow vehicular access to one of the world’s most spectacular viewpoints. On this route you will find yourself among great icy massifs with the north and south peaks of Huascarán, the summits of Huandoy, the legendary Chacraraju, Pisco, and Chopicalqui towering all around you. 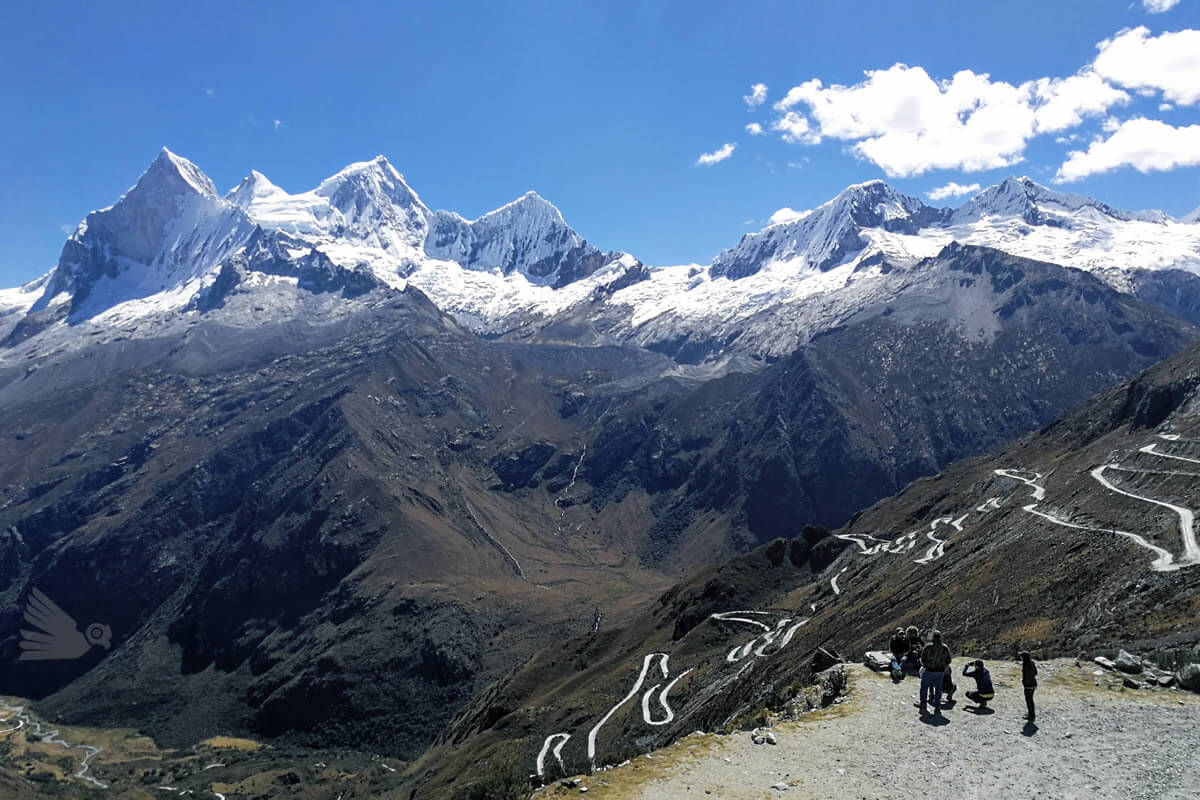 At the bottom and northern end of the Huaylas Valley there is an incredible canyon, which was carved out over the eons by the Santa River. It runs for 40 km and looses 2000 meters of altitude as it cuts through the Cordillera Negra on its way to the flat coastal plains. The route was originally constructed in the 1960s as a massive undertaking to allow train access to the Huaylas Valley, and to this end 33 tunnels were carved out of the vertical rock walls. The train tracks were destroyed in the 1970 earthquake and were eventually replace by a road. The route passes by the Cañón del Pato Hydroelectric Station, which was built in the 1950s by the engineer Santiago Antúnez de Mayolo to take advantage of the huge quantity of falling water in the canyon. If the adrenaline rush of traveling through dark tunnels on a one-lane road below almost 2000-meter cliffs is your thing then this is the trip for you. 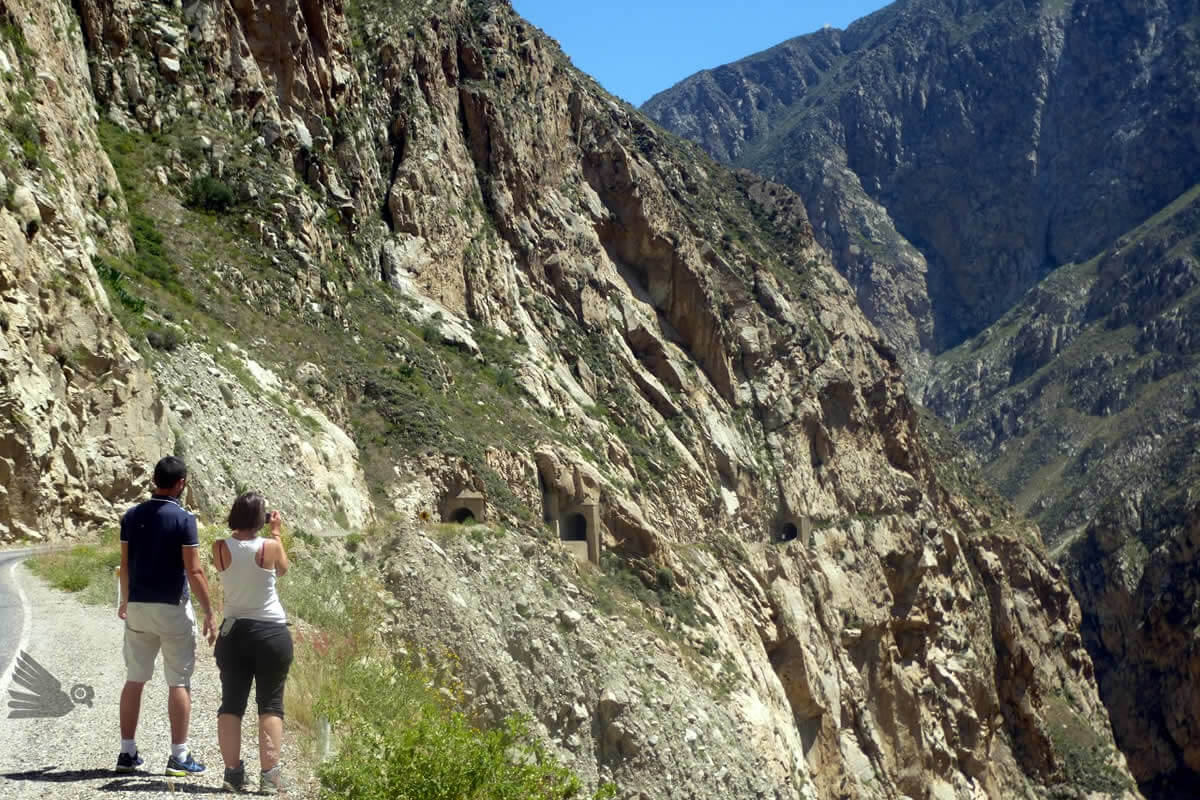 Very close to Huaraz, only 7 km northeast of the neighborhood of Independencia, there is an archeological complex called Wilkawain or Huilcahuain. According to current studies, the site is attributed to the ultimate period of the Recuay culture (1 BCE-700 CE) and then later occupied by the Huari culture (600-1100 CE). The superimposed platforms that were built here contain interior galleries that were probably used as repositories for offerings and as mausoleums. Furthermore, there are several large constructions called “Chullpas”. Wilkawain is an important site, well worth visiting, that forms a significant part of the history of the Andean people. 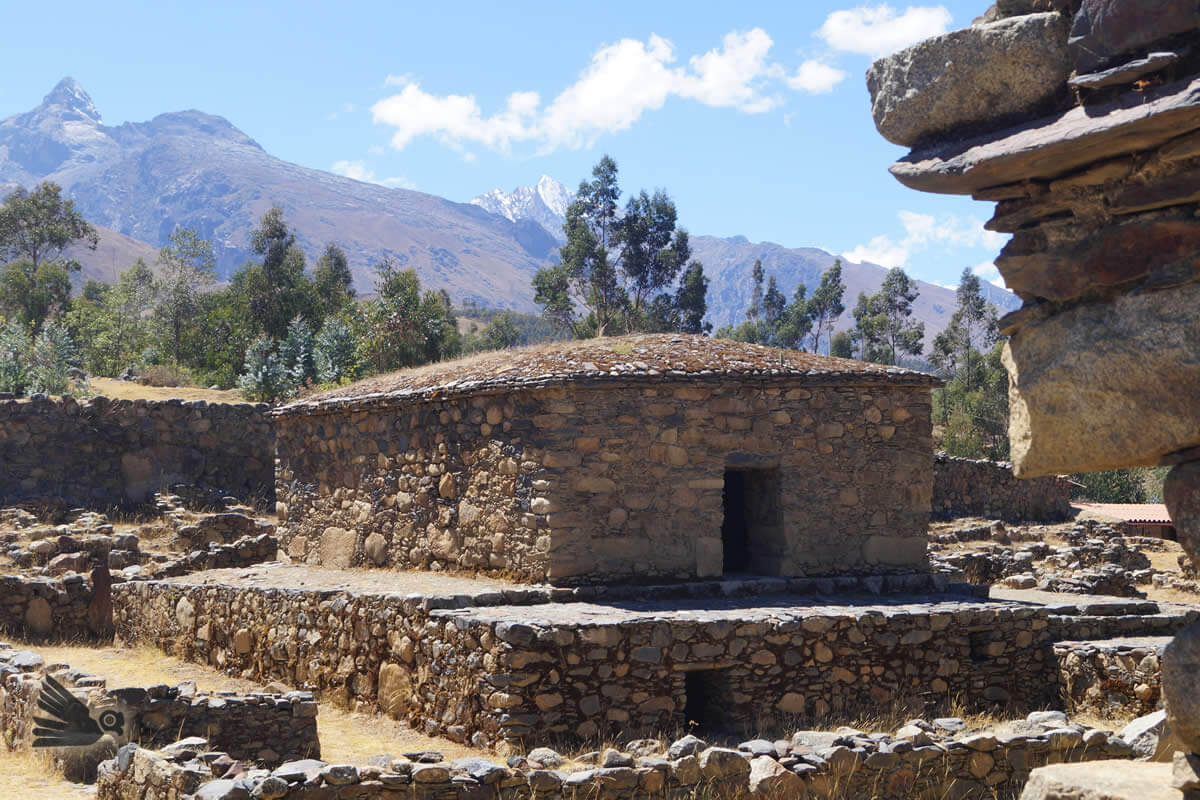 Honcopampa is located at 3,560 meters above sea level at the foot of the Akilpo Valley, province of Carhuaz, in the Cordillera Blanca. This is an archeological site covering about 12 hectares with an architectural complex composed of plazas, terraces, and multiple structures known as Chullpas. Honcopampa is also only one kilometer from the Yurak Yaku waterfall, which can be reached by foot in only 20 or 30 minutes. The route to the waterfall passes through forests composed of quenuales, which are fascinating trees native to this region. The nearby village of Honcopampa does presentations of hand-woven crafts for visitors. 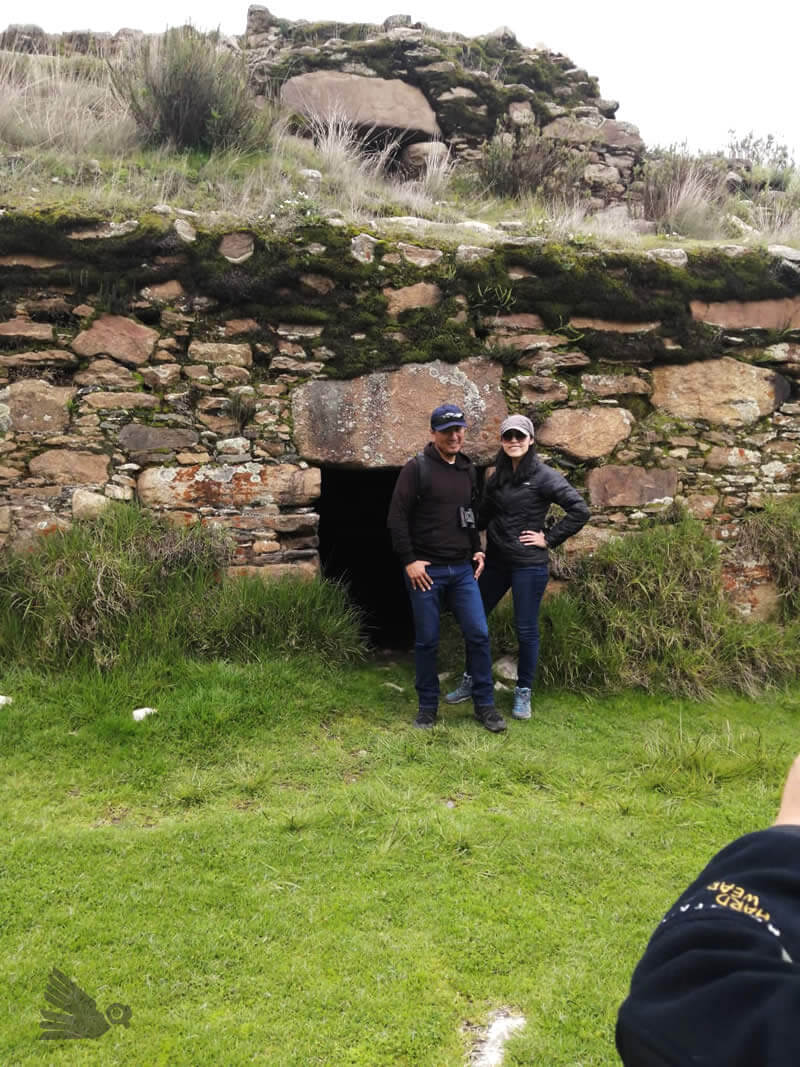 This is a newer one-day tour from Huaraz that has been getting more and more attention and deservedly so. The Punta Olímpica Tunnel (4,736 meters above sea level) is 1386 meters long and is considered the highest vehicular tunnel of its type in the world. This paved road passes through the Callejón de Huaylas and the Zona de los Conchucos sub-regions and offers amazing views of the icy peaks and lakes of both the Ulta and Putaca valleys. This is a tour that includes both up-close views of glaciated peaks and a visit to one of the most attractive and charming towns in the Peruvian Andes. The arrival of the religious congregation of Don Bosco has profoundly changed the face of Chacas by giving talented young people the opportunity to develop their artistic talents. Chacas in now wildly known as a producer world-class carpentry, stone carving, glasswork, and much more. 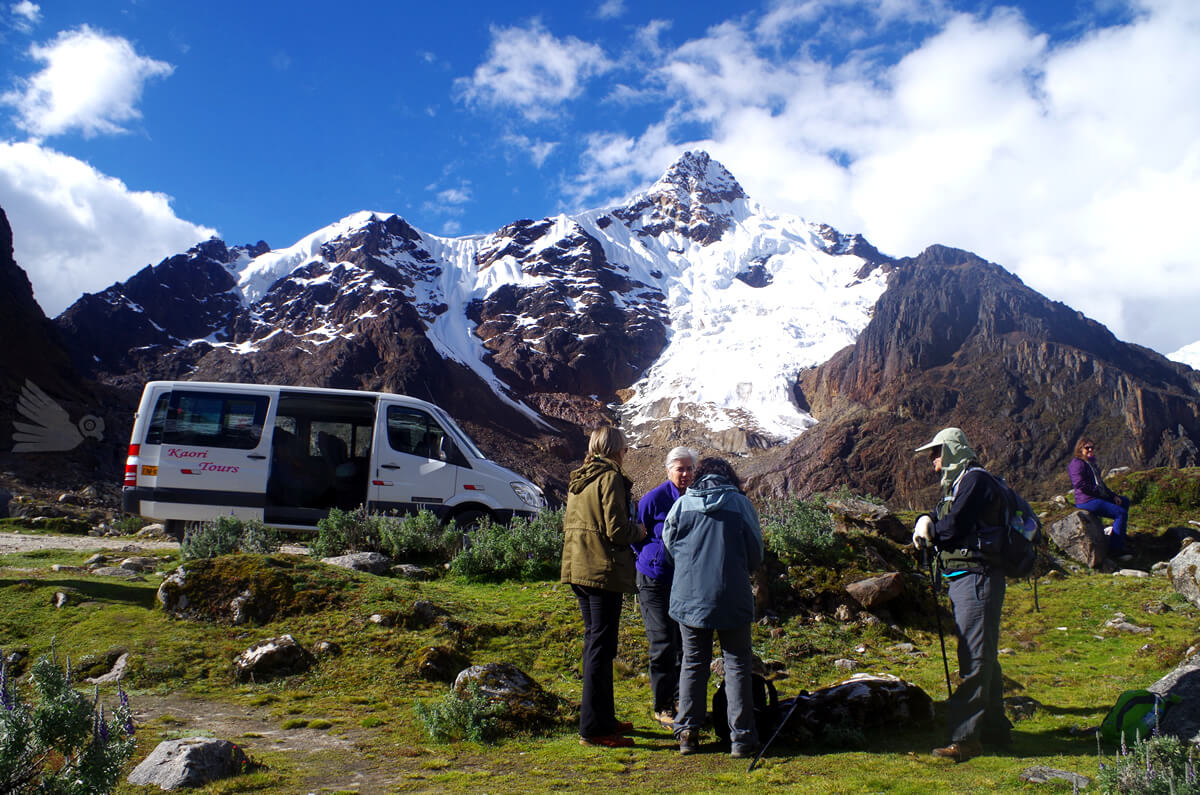 The name of the city of Huaraz finds its origins in the Quechua language, originally “Waraq” or “Waras” meaning “sunrise”. Huaraz is also known, quite appropriately, as the “city of international friendship”. It is located between the Cordillera Blanca and the Cordillera Negra at 3,100 meters above sea level. Huaraz has a solid tourist infrastructure and, for this reason, it serves as a home base for people heading off to the various routes in the Cordillera Blanca, but what is often overlooked is that Huaraz itself also has several attractions that are well worth visiting, such as the Rataquenua viewpoint and Pukaventana trek, the Museo Arqueológico with its fantastic collection of Recuay culture monoliths, the recently re-appropriated ancient pilgrimage site of Pumacayan, the Waullac archeological park, public markets, rock climbing cliffs, biking routes, and hikes to local villages and lakes. 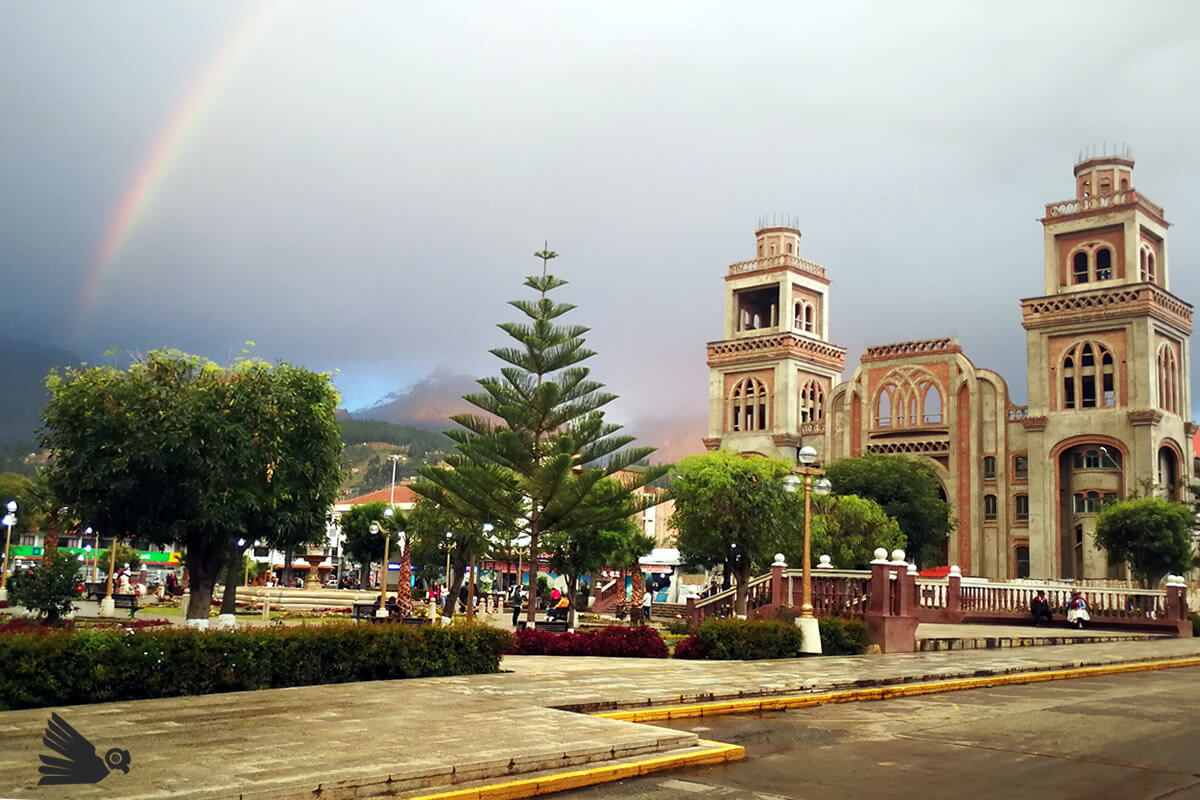 If you are interested in knowing more about any of the above tourist destinations, we would be happy to help you plan your Huaraz adventure. CONTACT US