Huaraz, the adventure sport mecca of the Peruvian Andes, is a popular starting point for ambitious multiple-day treks and climbs in the Cordilleras Blanca and Huayhuash. However, there are also many possible one-day outings you can do from Huaraz that are just as beautiful and interesting as the longer routes. There are routes that visit high valleys, archeological sites, curious rock formations, traditional villages, and alpine lakes, which are all easily accessible from town and are an excellent way to acclimatize before attempting a longer adventure. These treks are also perfect for people who have time constraints, but would still like to sample what the Cordillera Blanca has to offer. The various one-day trips are designed for people with differing levels of outdoor experience, different tastes, and different levels of fitness. 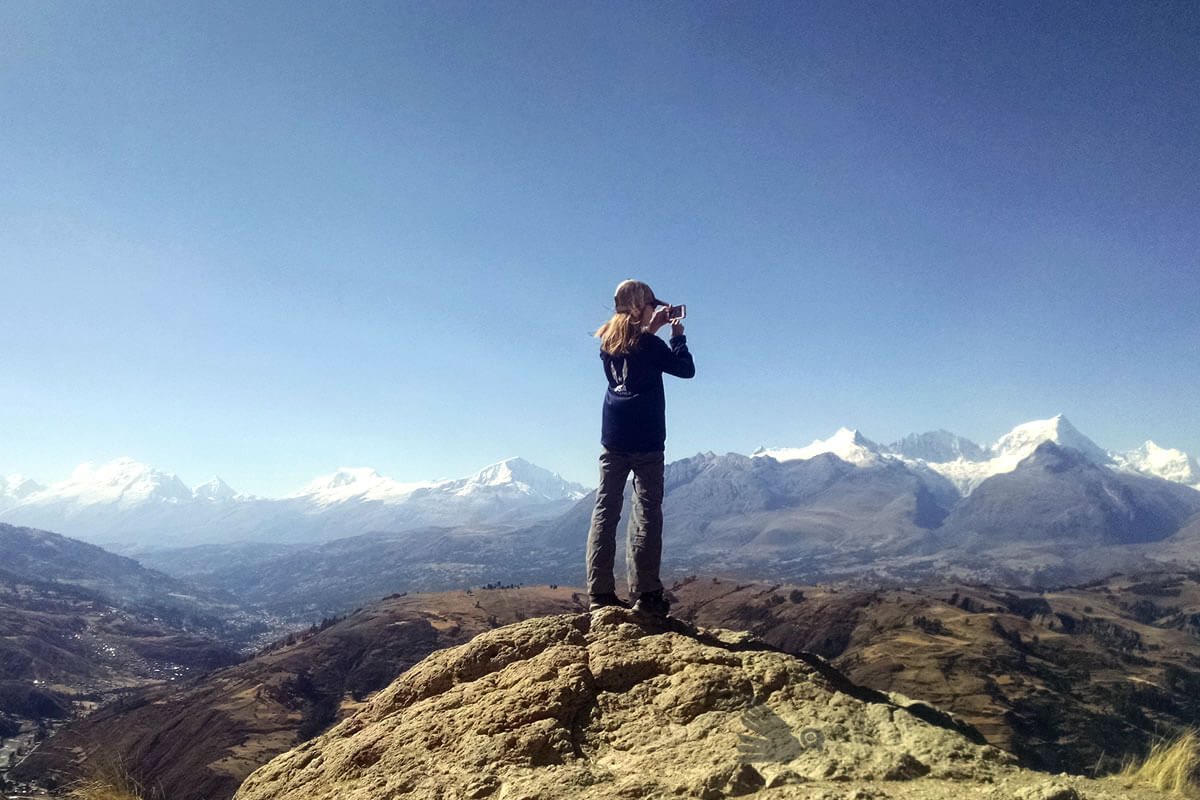 Here is a list of ten of the most interesting treks easily accessible from Huaraz.

The Pukaventana (Red Window) is an easy to moderate route. This local classic begins right on the edge of town and is an excellent day-hike for those who would like to get a sense of the incredible geography of the glaciated peaks of the northern and southern Cordillera Blanca and also the more rounded summits of the Cordillera Negra. The citizens of Huaraz are very fortunate to live in one of the few places on earth where you can have easy access to a 360º panoramic view featuring the world’s highest tropical mountain range.

This trek usually takes four to five hours to complete. 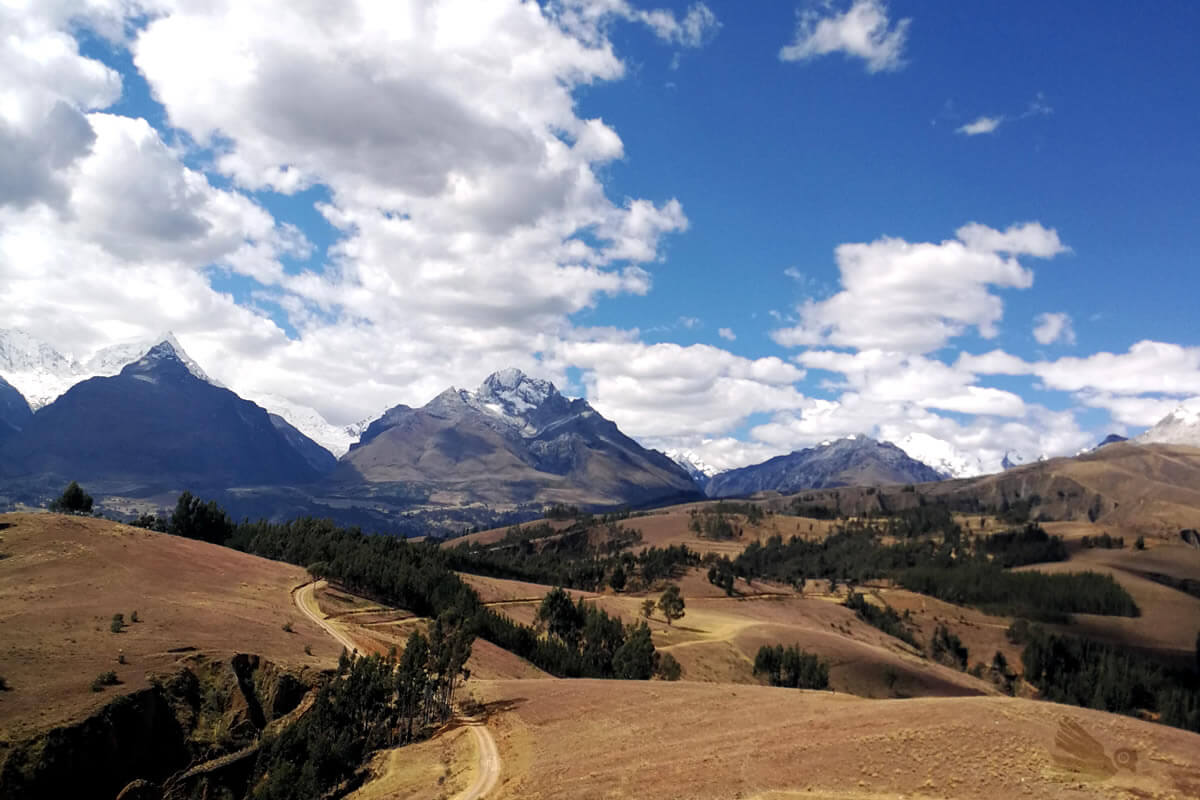 This is a hike that begins at the base of the Cordillera Negra just a few kilometers from Huaraz. Wilkacocha is a lake located at an altitude of 3640 meters with excellent habitat for high-altitude waterfowl such as ducks, ibis, coots etc. This spot is on the opposite side of the valley from the tallest mountains and for this reason it is well situated for magnificent views of the peaks of the Cordillera Blanca such as Huandoy, Huascaran (the tallest mountain in Peru), Copa, Ranrapalca, etc. Wilkacocha is perfect for a day of acclimatization, a short day, or a relaxing easy day.

The round trip usually takes five or six hours. 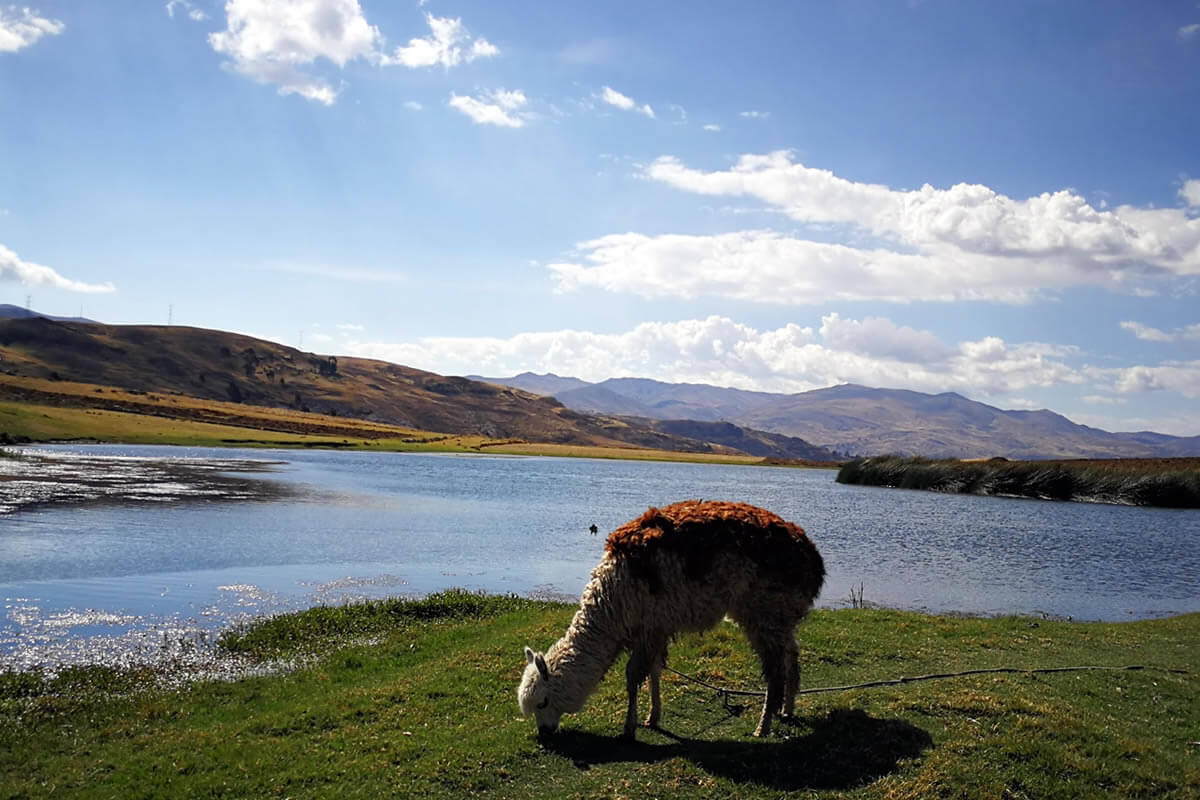 This is a hike to a glacial lake that is popular with both international tourists and local hikers. The lake is situated between great blocks of granite that form a natural dam at the foot of the 5450 meter peak called Churup. Here you will find attractive alpine forests of queñual trees (polylepis), kiswar trees, and other native trees and bushes. The lake itself is a green/turquoise color that never fails to impress visitors. The trail to Laguna Churup begins a few kilometers to the east of Huaraz. Some people will find themselves challenged by this steep hike, which usually takes five or six hours for the round trip, but the view at the lake makes it all worthwhile. We recommend that you bring along water, food, a warm jacket, and adequate footwear for this hike. 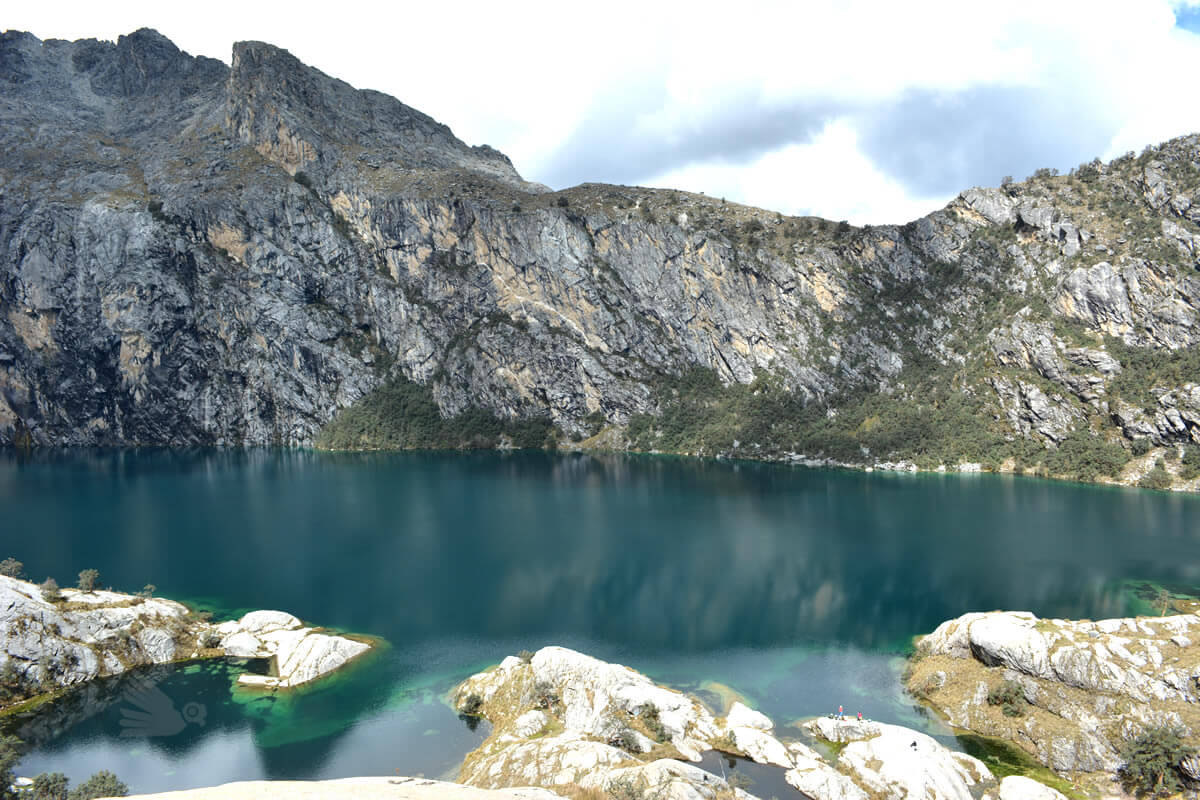 Laguna Llaca is a glacial lake, which, like many of these lakes, is within the borders of Huascaran National Park and is situated at the bases of the famous summits of Ranrapalca (6162 meters above sea level) and Ocshapalca (5888 masl). As with many glaciers worldwide, the glaciers in this region are receding and this has caused a year-by-year increase in the lake’s volume. Trekking in the valley is very pleasant because, as you gradually gain elevation, you are constantly surrounded by beautiful alpine vegetation (queñal and quisuar trees), birdsong, and glimpses of viscachas. At least 50 species of birds, some very rare, are known to exist in the valley. The Llaca Valley is where the Casa de Guias bases their yearly mountain rescue course and it is also the starting point for the trail to the moraine camp of Vallunaraju, a mountain well known to mountaineers. This is a route of only moderate difficulty.

We suggest you bring along water, a warm jacket, and appropriate hiking shoes. 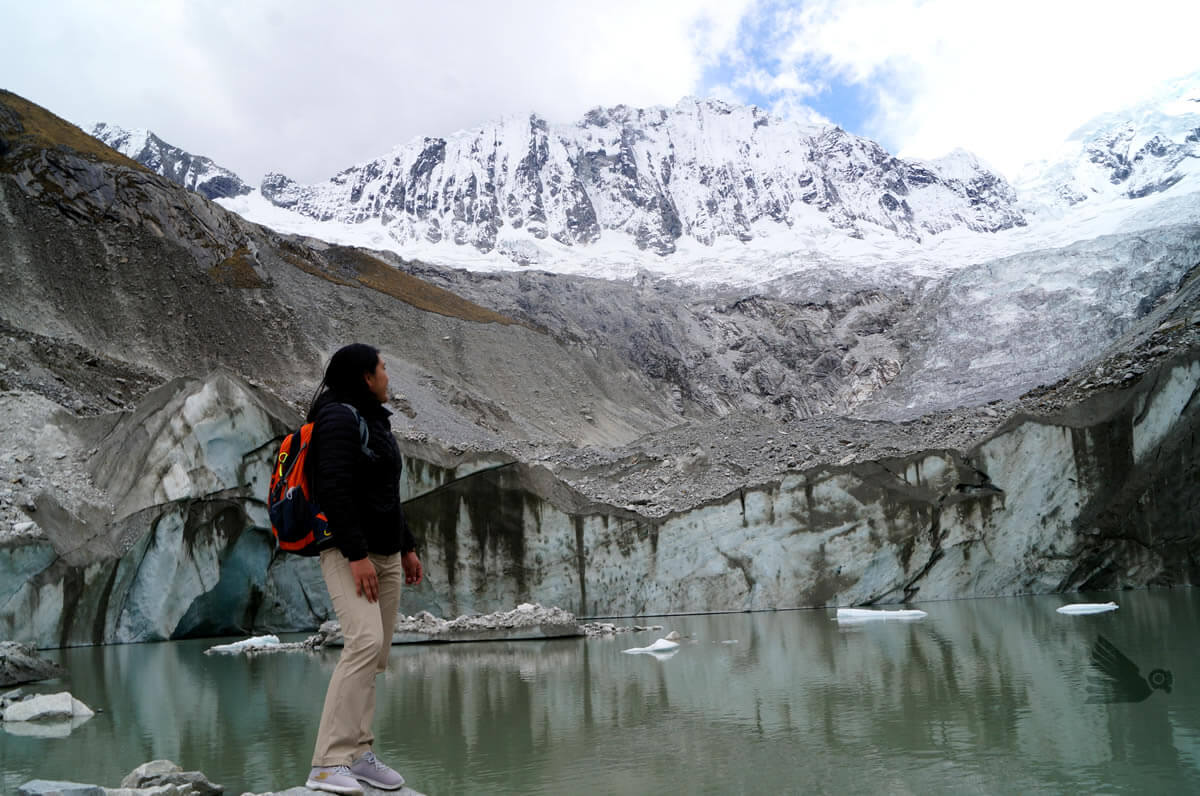 At the foot of the legendary mountain, Huantsan (6670 masl), nicknamed the “K2 of the Andes”, you will find beautiful Lake Rajucolta at an altitude of 4250 meters. This is a perfect destination for a day of acclimatization or for a pleasant excursion with friends. Like many of the high lakes of the Cordillera Blanca, it is controlled by a man-made dam. The trip to Rajucolta passes through the charming village of Macashca and then the trek itself begins at a gate located a bit further up the road. A low-angle trail gradually ascends this extensive Andean valley arriving at the lake via a pleasurable route that travels alongside a river. This is a full-day adventure. We recommend that you bring along water, food, warm clothes, and sunscreen. 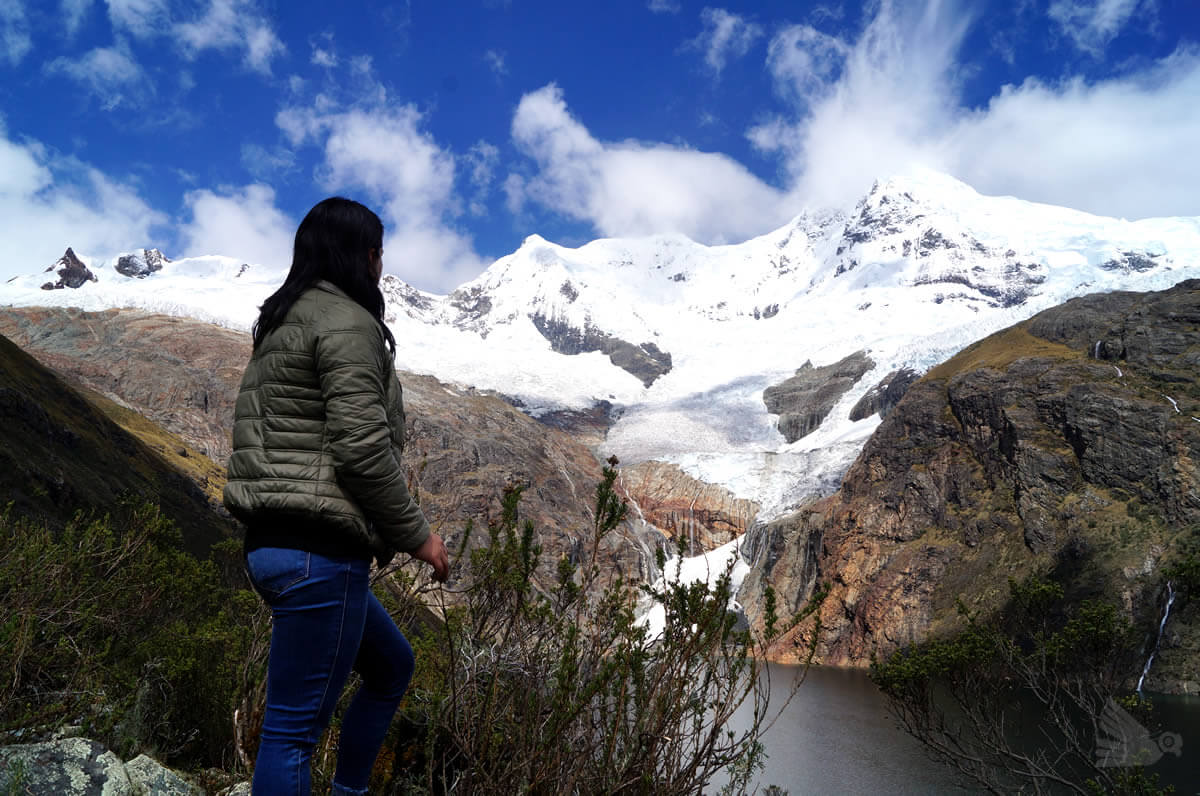 Hatun Machay is located to the southeast of Huaraz, at an altitude of 4260 meters in the community of Pampas Chico in the Cordillera Negra.

This is a collection of dramatic volcanic rock formations with the whimsical forms of animals, mushrooms, humanlike figures, and anything else you might imagine. It is also pocketed with natural caves. A visit to Hatun Machay is a mysterious and timeless experience as you can almost feel the rock being patiently carved by the eons of wind and the rain. In its time, Hatun Machay, which is Quechua for “big cave”, was also an important pre-Hispanic ceremonial center. One of these “machays” features ancient figures carved and painted into the rock. It is also worth mentioning that Hatun Machay is perfect for rock climbers and has over one hundred bolted routes. Visiting Hatun Machay takes about five hours round trip including a couple of stops along the way. 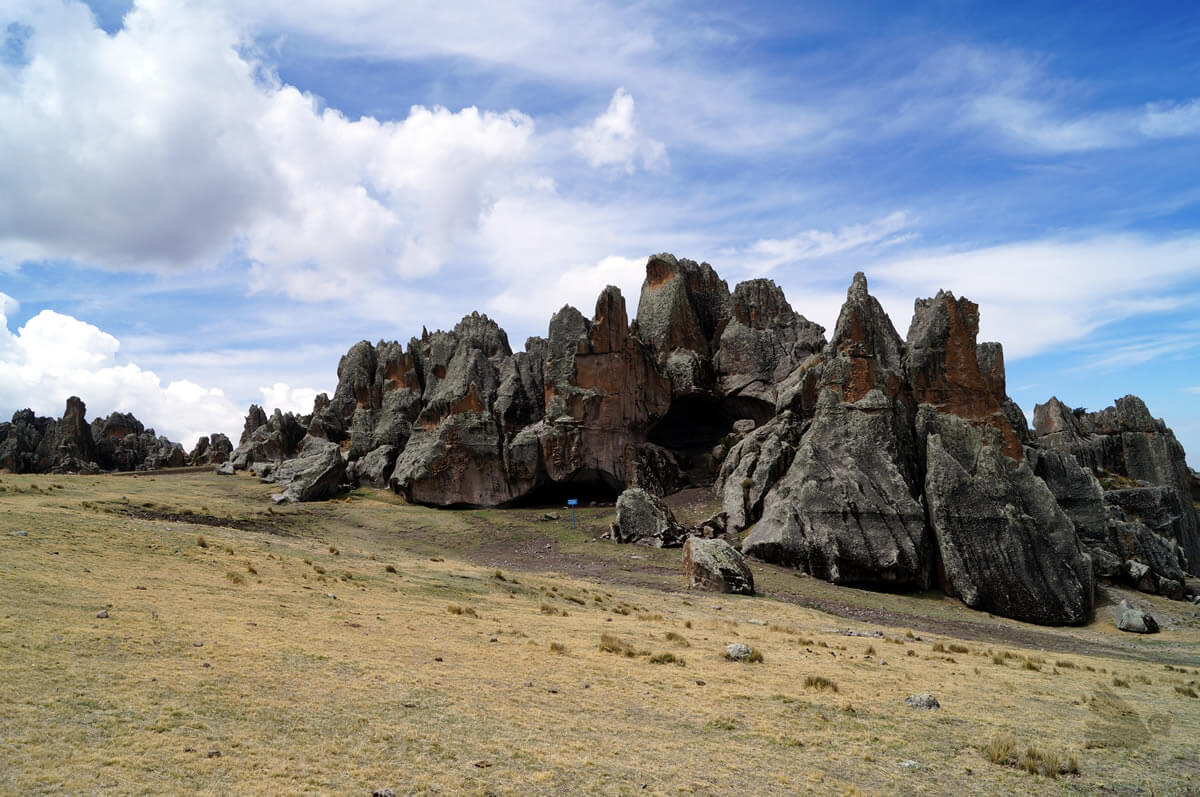 The trip to Pastoruri is an interesting destination for those who would like to see the effects of global warming on the southern Cordillera Blanca first hand and is for this reason also sometimes called the “route of global climate change”. Not long ago it was common for tourists to walk on the glacier itself and to even build snowmen, but these activities are no long possible. The current situation has greatly changed the physical appearance of the Pastoruri glacier, creating new lakes and ice caves, and has even exposed rocks with fossilized plants, which has made the experience of visiting Pastoruri in some ways more interesting than before. On the way to the glacier it is also popular to visit a grove of the iconic Puya raimondii. This is the world’s largest bromeliad famous for its extraordinary enormous inflorescence. Before embarking on this route we recommend a few days of acclimatization as Pastoruri is situated at an altitude of 5000 meters. 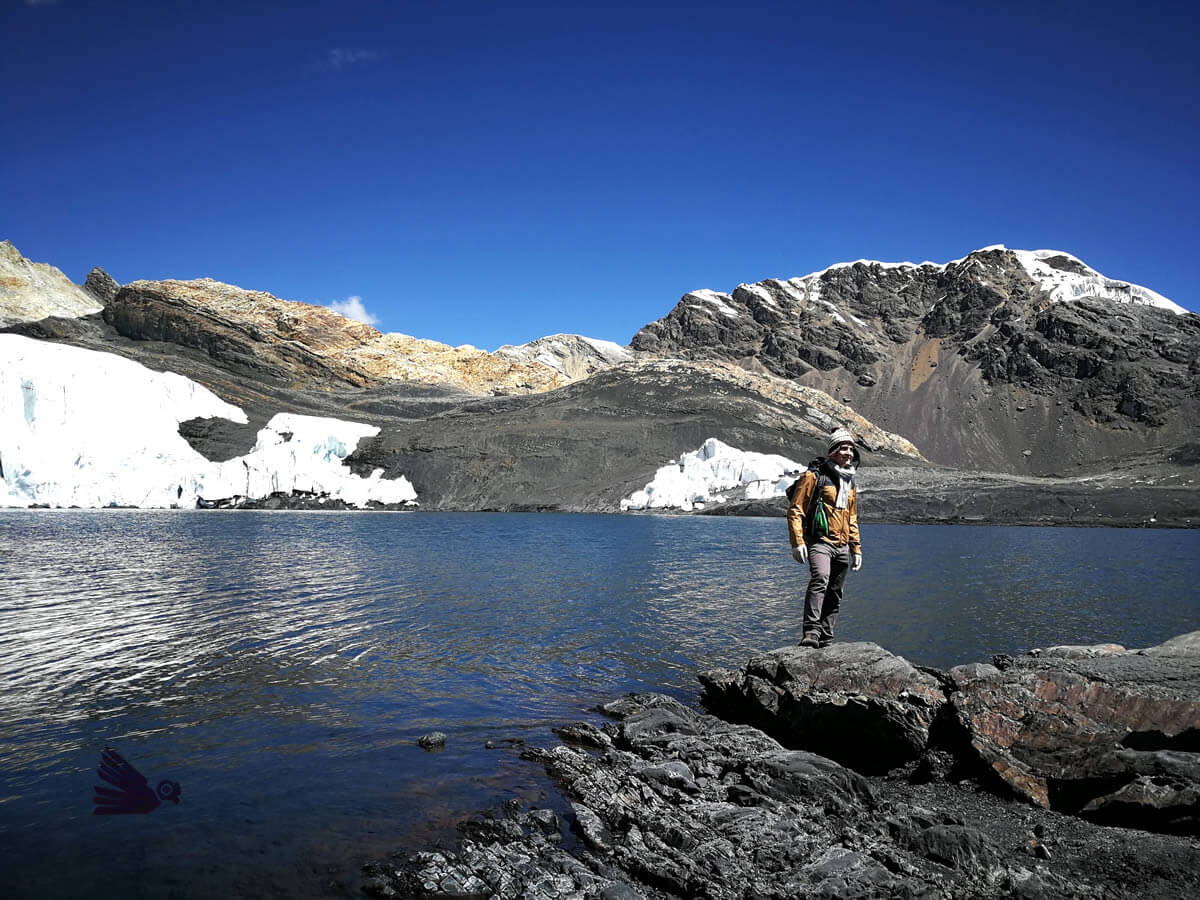 The trek to Lake Uruscocha is beautifully situated for views of the south peak of Huascaran (6768 masl), the highest summit of the world’s tallest tropical mountain range. Lake Uruscocha is at an altitude of 4380 meters at the base of the mountain Urus, which is known as one of the easier climbs in the Cordillera Blanca. To reach lake Uruscocha you drive northeast from Huaraz via the same route that goes to the Ishinca Valley, but taking a detour that veers left from the Ishinca trail. The majority of the trek passes through forests of polylepis and other native trees and arrives at the lake after about three hours of walking. Another lake called Yanacocha is located about ten minutes further. This trek takes a full day to complete so we recommend that you bring food, warm clothes, and sunscreen. 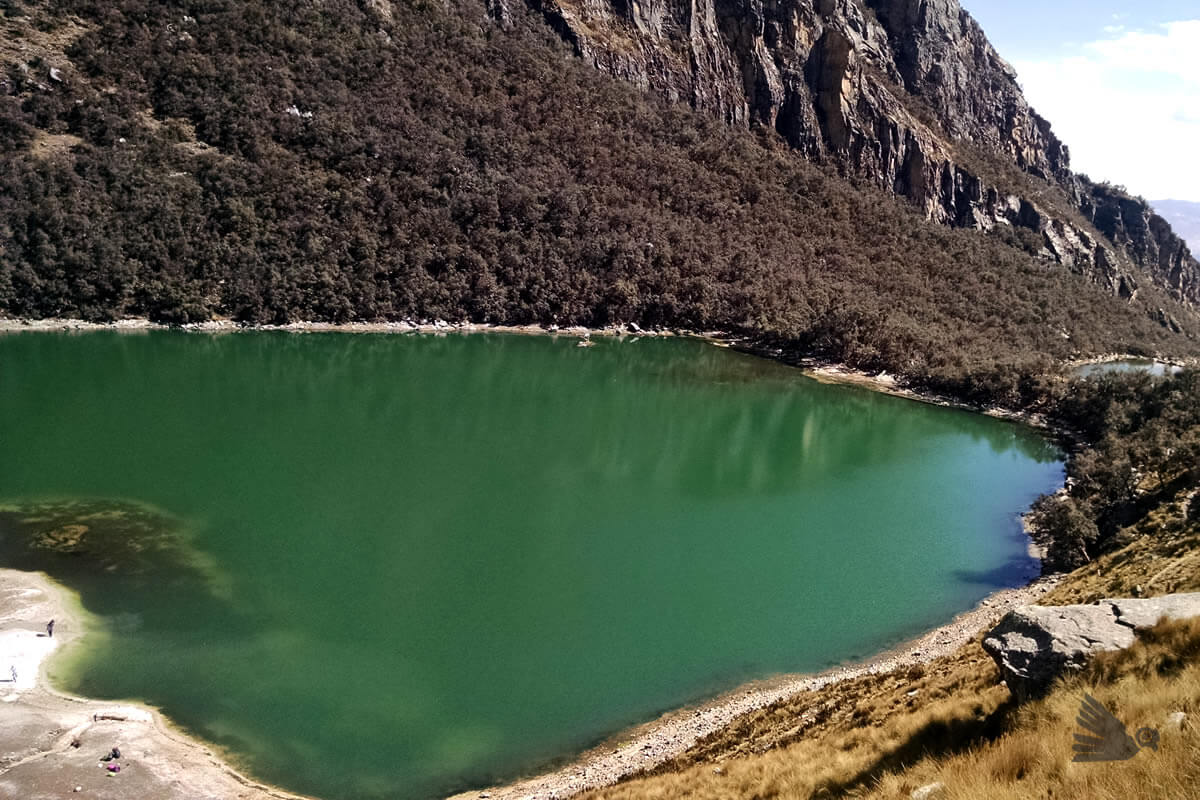 This is without a doubt one of the most beautiful day hikes in the park and has become very popular in recent years. Lake 69 is located at an altitude of 4650 meters at the base of the mountain Chacraraju (6112 masl), which is considered one of the most difficult mountains to climb in the Cordillera Blanca. The lake is renown for its crystalline waters and spectacular setting. The drive to Lake 69 heads to the north down the valley from Huaraz and then turns east into the mountains at the original location of the city of Yungay, which was buried in an earthquake in 1970. At this point begins a long ascent, which passes the beautiful lakes, Chinancocha and Orqoncocha and arrives at the starting point of the trek. On the hike to the lake huge peaks like Huascaran, Huandoy, Chopicalqui, the ever-popular Pisco, and several others loom in all directions.

This route is more pleasant if you first spend a few acclimatization days around Huaraz. 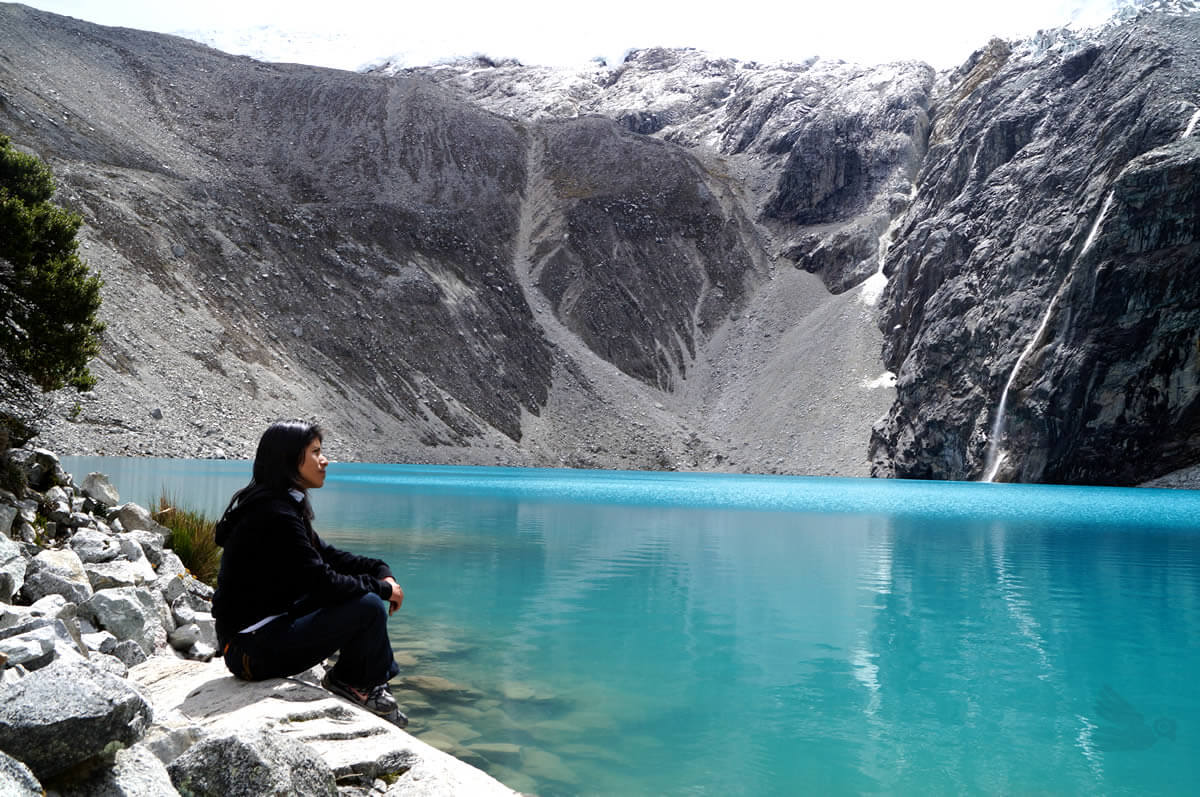 Located northwest of Huaraz, Lake Paron is perhaps the furthest destination north of Huaraz that can be reasonably done as a one-day trip. To reach the lake it is necessary to drive almost the entire length of the Huaylas Valley. It is situated at an altitude of 4185 meters and considered to be the largest lake in the Cordillera Blanca. It is is fed by run off from the glaciers of the big peaks: Huandoy, Pisco, Piramide, Chacraraju, and Artesonraju, the last of these being famous as the inspiration for the classic Paramount Pictures logo. This is considered an easy trip because the road ends right at the shore of the lake. From here a hike of about an hour takes us to a viewpoint from which we can observe the lake in all its splendor and also the surrounding glaciated peaks. This is a full day trip, so we recommend that you bring the appropriate provisions. 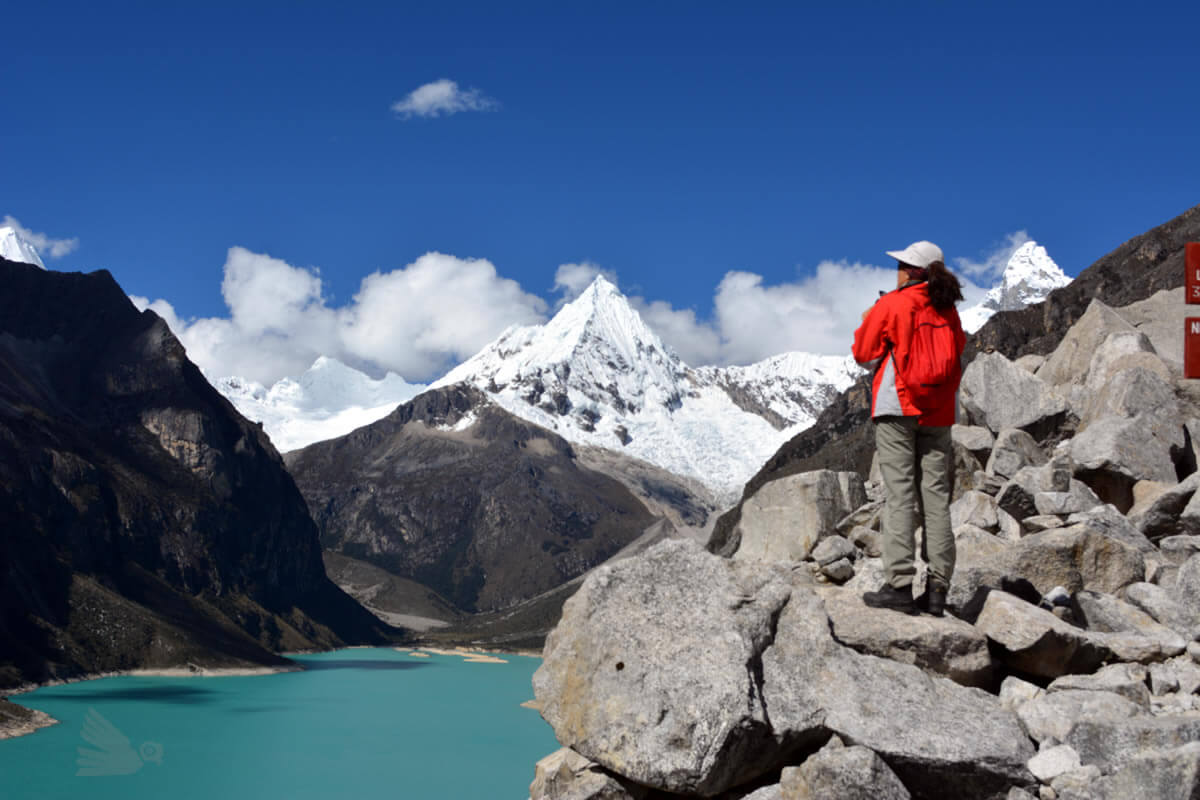 Here you can find a small reference map of these beautiful places. 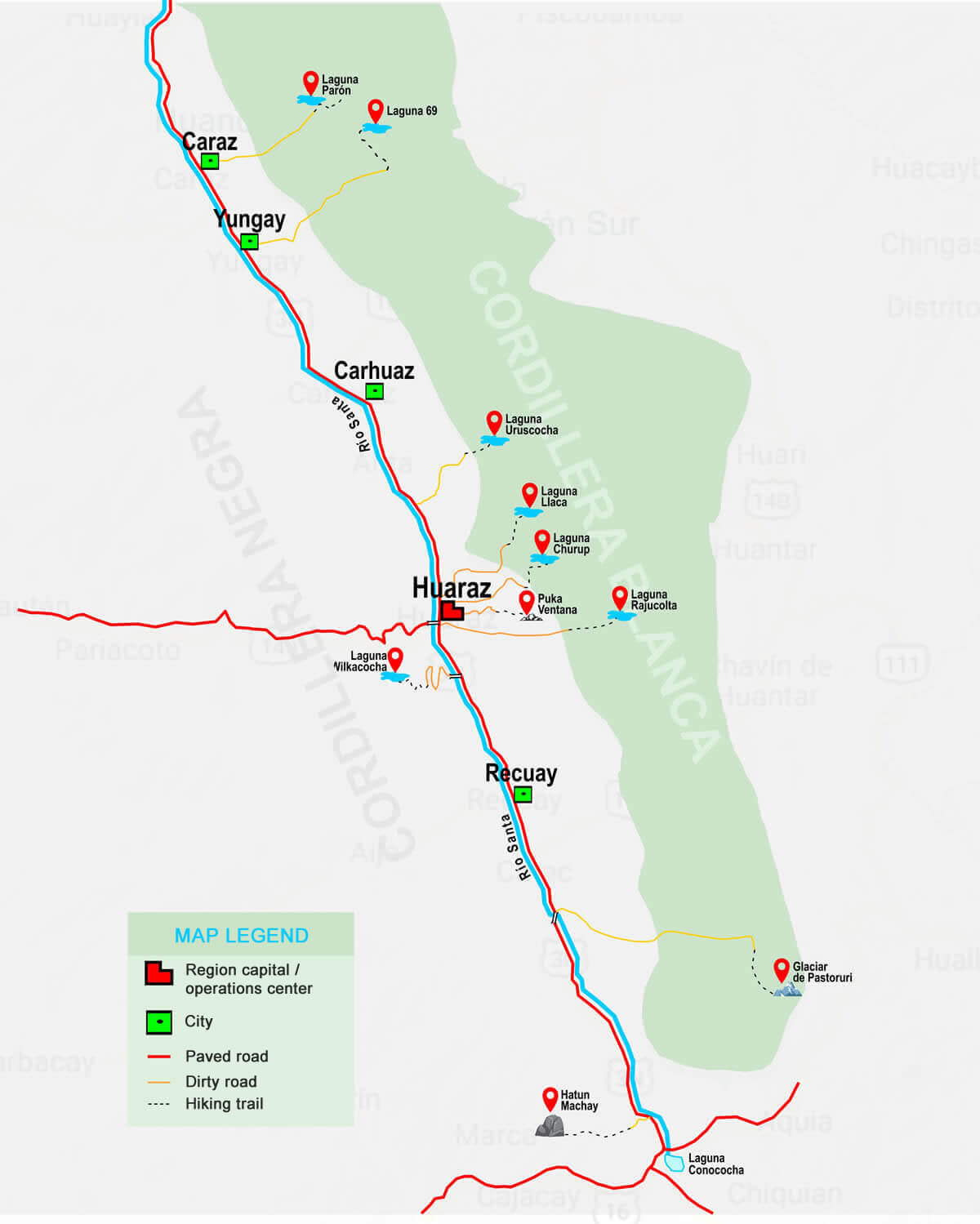