The Alpamayo trek: walking around the most beautiful mountain in the world

The Alpamayo Trek, located in the north of the Cordillera Blanca is considered as one of the world’s most spectacular high-mountain routes. The trek is fast becoming a classic because it affords an up-close view of the almost perfectly pyramidal north face of Alpamayo (5947m), which was named the “most beautiful mountain in the world” by the magazine Alpinismus in 1966. This beautiful route also boasts views of huge glaciated peaks such as Taulliraju and Quitaraju, the impressive Pucahirca group, the sharp summits of Santa Cruz, deep glacier carved valleys and lakes, high passes that almost touch the glaciers, Andean flora and fauna, and mysterious archeological sites. 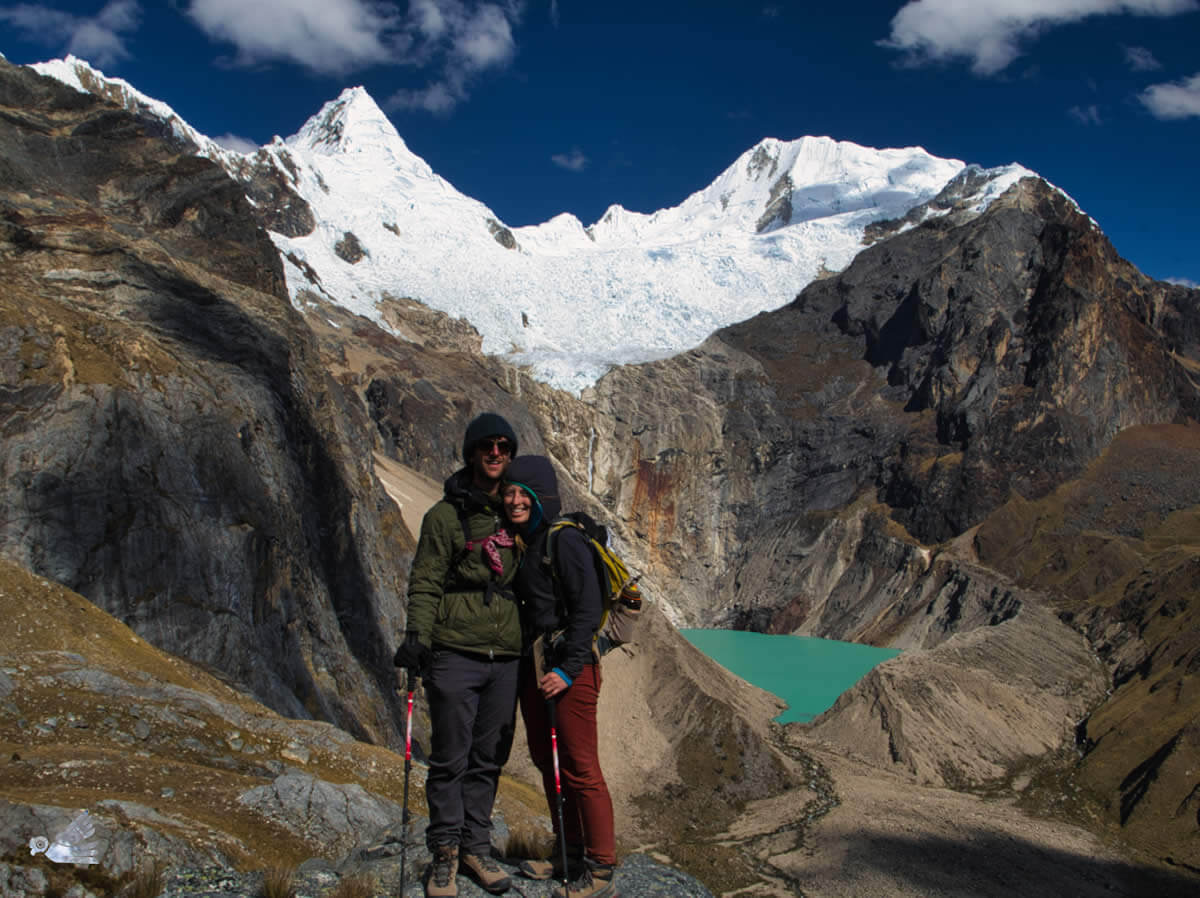 Of all the worthwhile treks in the Peruvian Andes, this may be the most remote and least traveled. The Alpamayo Trek can be done in ten days covering approximately 100 kilometers of distance. Its lowest point is 3250 meters and its highest point is 4850 meters above sea level.

The average hiking time each day is about six hours. We rate this trek as moderate to difficult.

The Best Time of the Year for the Alpamayo Trek

As in all of the Peruvian Andes, the best time of they year to do the Alpamayo trek is during the dry season from mid-April through September; this is known as the Andean summer. In this season you can expect mostly sunny days with an average mid-day high temperature of 20° C and temperatures that fall to below 0° C at night. Occasional days with rain or snow do happen during the Andean summer, so you should go prepared for any eventuality. Generally, a touch of bad weather is no big deal on a trek. In fact, when you are adequately prepared, a bit of snow can be fun.

Preparing for Your Trek

On the Alpamayo Trek you’ll be spending 10 days almost entirely above 4000 meters and will be crossing passes that reach almost 5000 meters. For this reason, being adequately acclimatized is essential.

Another important thing you can do to aid in the acclimatization for your trek is to drink plenty of water. For this reason we recommend that you drink at least two liters of water each day. 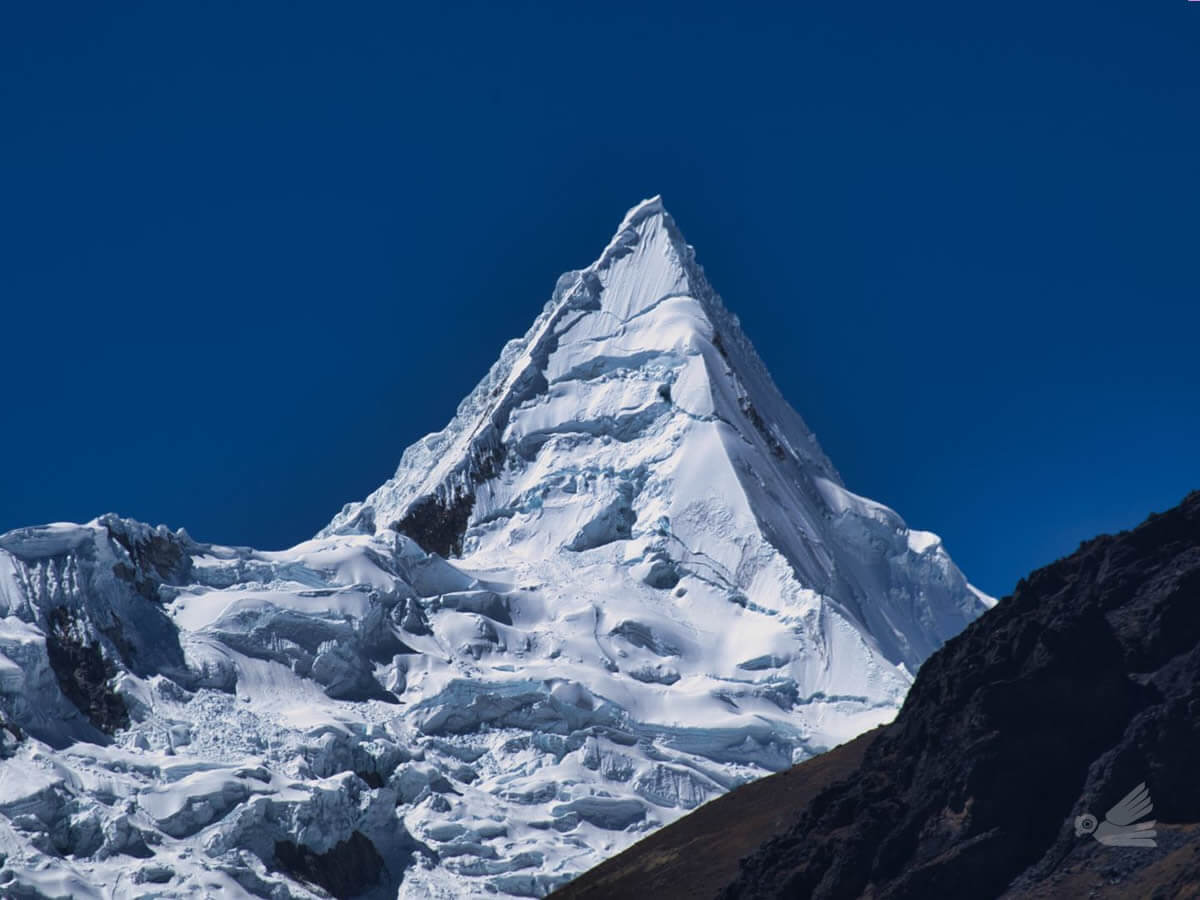 If this is your first long-distance high-altitude trek, we also recommend that you go with a group, ideally a trip organized by a reputable trekking agency. CONTACT US, we are able to help you planning this experience.

Camping on the Alpamayo trek

The Cordillera Blanca does not have a system of lodges or huts on any of its trekking routes so most of the nights on the Alpamayo Trek must be spent camping in tents that we bring along with us. The official campsites along the route are well marked by signs.

Following the itinerary we suggest, you can sleep the first night at a hotel in Vaquería instead to camp. You can also find accommodation, generally very simple, near the other trailheads such as the village of Cashpampa or near the alternative finish in Pomabamba, which is not too far from the Jankapampa campsite.

There are also no bathrooms on the route, so it is necessary to improvise in a responsible manner. On the treks that we arrange, we set up a toilet tent at each campsite, which is situated over a small hole that will be covered up with the original sod and essentially invisible when we leave. As with all elements of our treks we strive to leave as little human impact as possible.

For a trip of more than a week’s duration, such as the Alpamayo Trek, you will need to purchase the 150 Nuevo Soles ticket for Huascaran National Park. As this ticket is good for 30 days, it makes sense to buy it in Huaraz at the park’s office (Calle Federico Sal y Rosas N° 555) so you can also use it for any acclimatization hikes, the trek itself, and also on any other subsequent visits to the park within the 30 day limit.

Where to begin the Alpamayo Trek

The easiest and most practical way to start the Alpamayo Trek is use the city of Huaraz as a base for acclimatization and logistics. Huaraz is located 400 Km north of Peru’s capital, Lima and has all the tourist infrastructure that domestic and international visitors need to prepare for treks in the nearby mountain ranges. Huaraz has many excellent hotels, restaurants, and is the location of most of the trekking agencies that arrange trips. It is also at a practical altitude for acclimatization and has many good warm-up hikes that are easily accessible from town.

Of course, you could also base yourself in many of the other smaller towns in the Huaylas valley or on the other side of the mountains in the Conchucos Valley. Most of them are also high enough to acclimatize and have a basic infrastructure of hotels and restaurants as well. 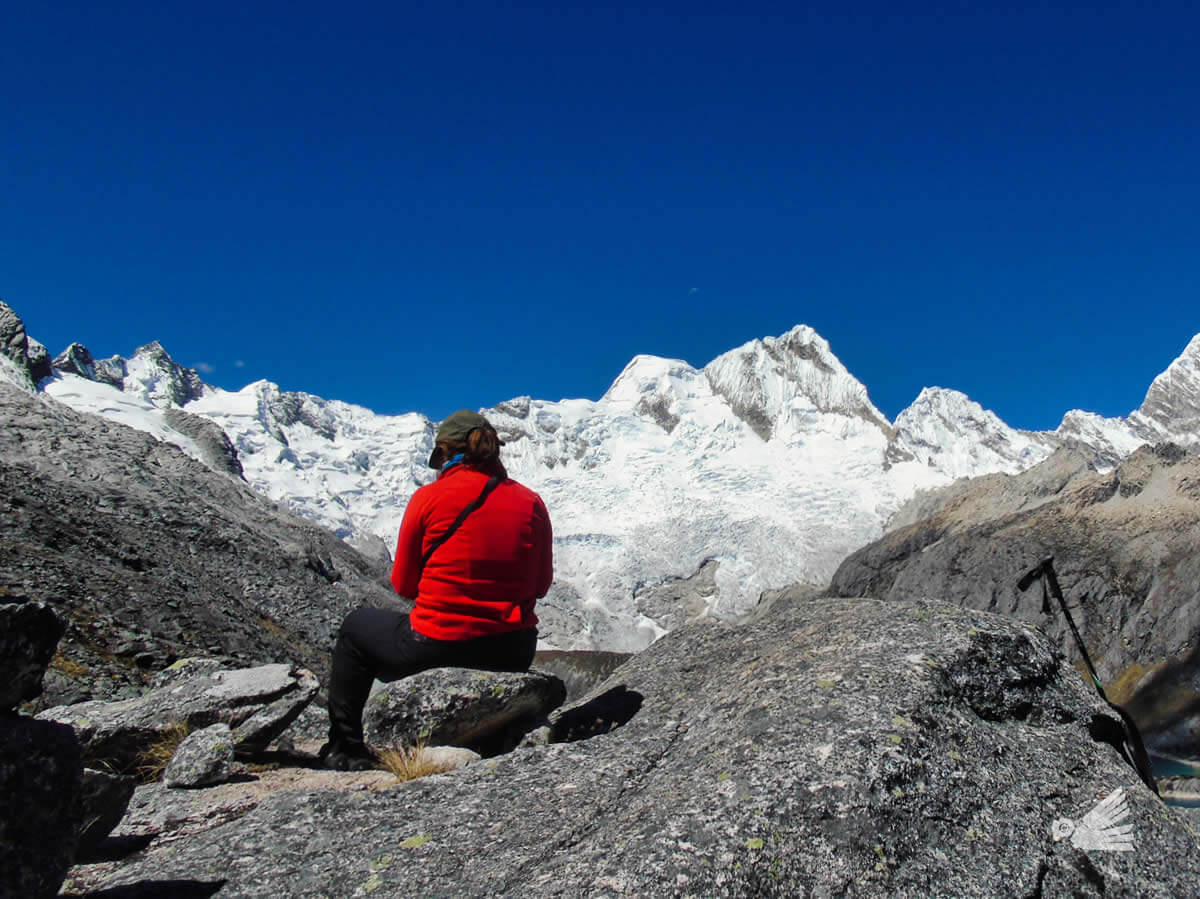 You can begin the Alpamayo Trek in the village of Hualcayan (3250m), which is located at the northern end of the Huaylas Valley below the peaks of the mountain Santa Cruz or in the village of Vaquería (3700m), which lies on the east side of the Cordillera Blanca and is reached by driving across Portachuelo Pass via the same road that passes by the famous Llanganuco Lakes. We generally prefer to begin the trek in Vaquería because it doesn’t require a long steep climb on the first day and thus allows you to continue acclimatizing gradually.

Map of the Alpamayo trek 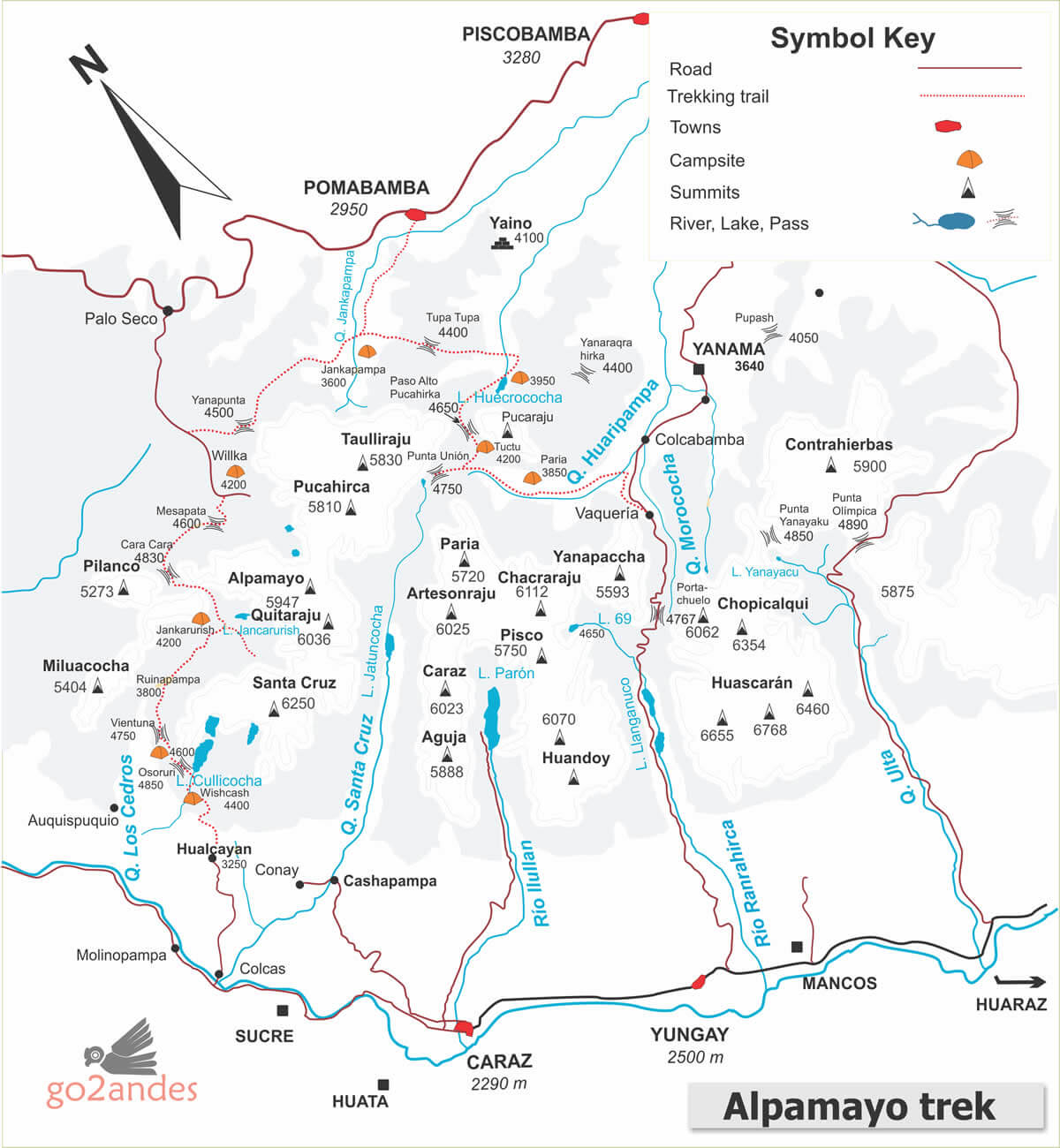 Map of the Alpamayo trek

Some Helpful Recommendations for the Alpamayo Trek

The Alpamayo trek passes through remote regions where there are few people and little cell phone coverage, for this reason we recommend that you hire a guide who knows the area well. Fortunately there are trekking agencies that work with very experienced guides and can take care of all the logistics, carry the equipment, do the cooking, etc. leaving you free to focus on the hike and to enjoy the magnificent views.

If you suffer from any health issues, including food allergies or sensitivities, and you are traveling with an agency, please let them know before you leave on the trek so that your guide is aware of any potential problems… just in case. Go2Andes has trekkers fill out a short medical form and we are also able to communicate via satellite telephone at any point on the trek should issues arise.

While you trek you will need to carry a small daypack with a warm jacket and rain gear because we are sometimes surprised by rain even on days that seemed like they were going to be perfect. 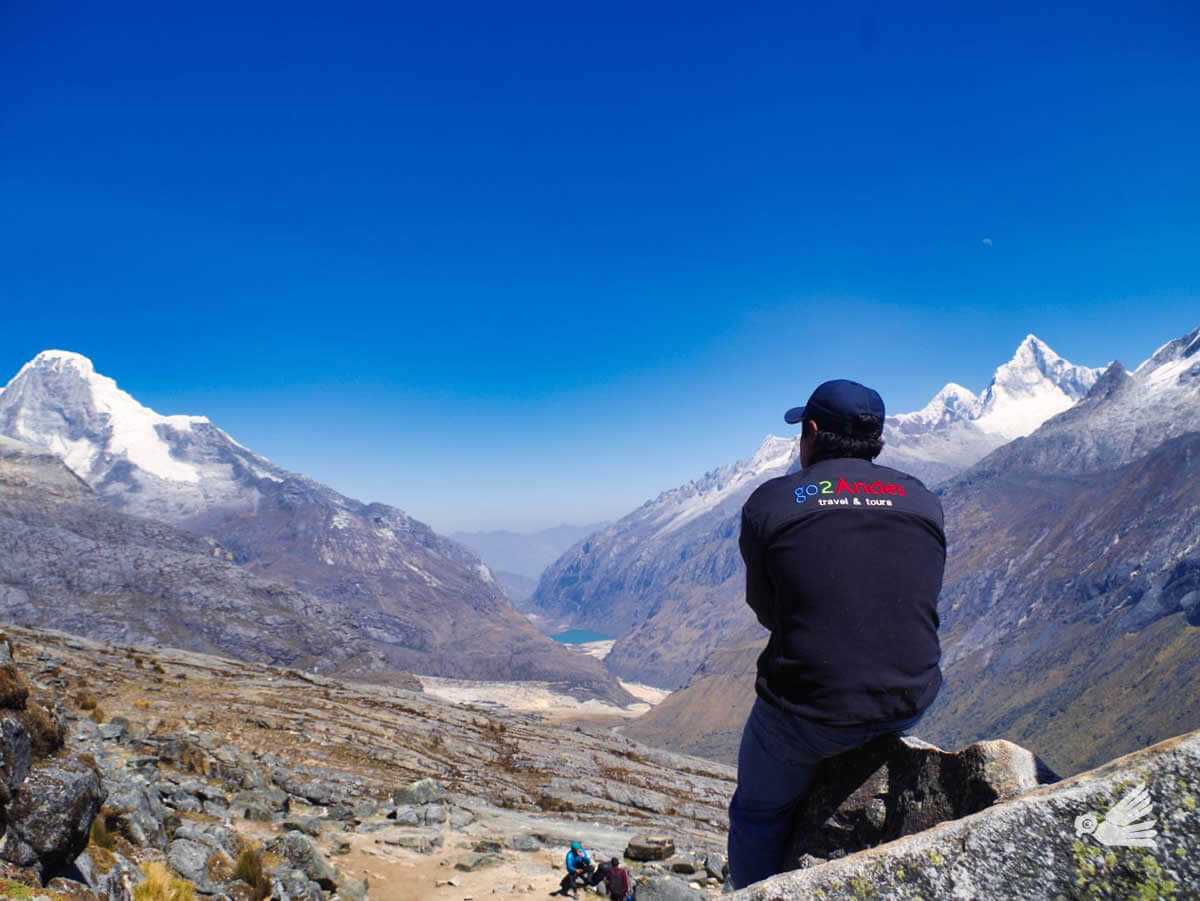