Cordillera Huayhuash circuit: the most beautiful trek in the Andes

The Cordillera Huayhuash is a playground of magnificent snow and ice clad mountains, which feed dozens of multi-colored lakes and crystalline rivers and streams. It is also a region rich in Andean flora and fauna.  Here takes place the Huayhuash circuit, considered as one of the ten most beautiful treks in the world by a majority of outdoor enthusiasts. Without a doubt, this is a special place. 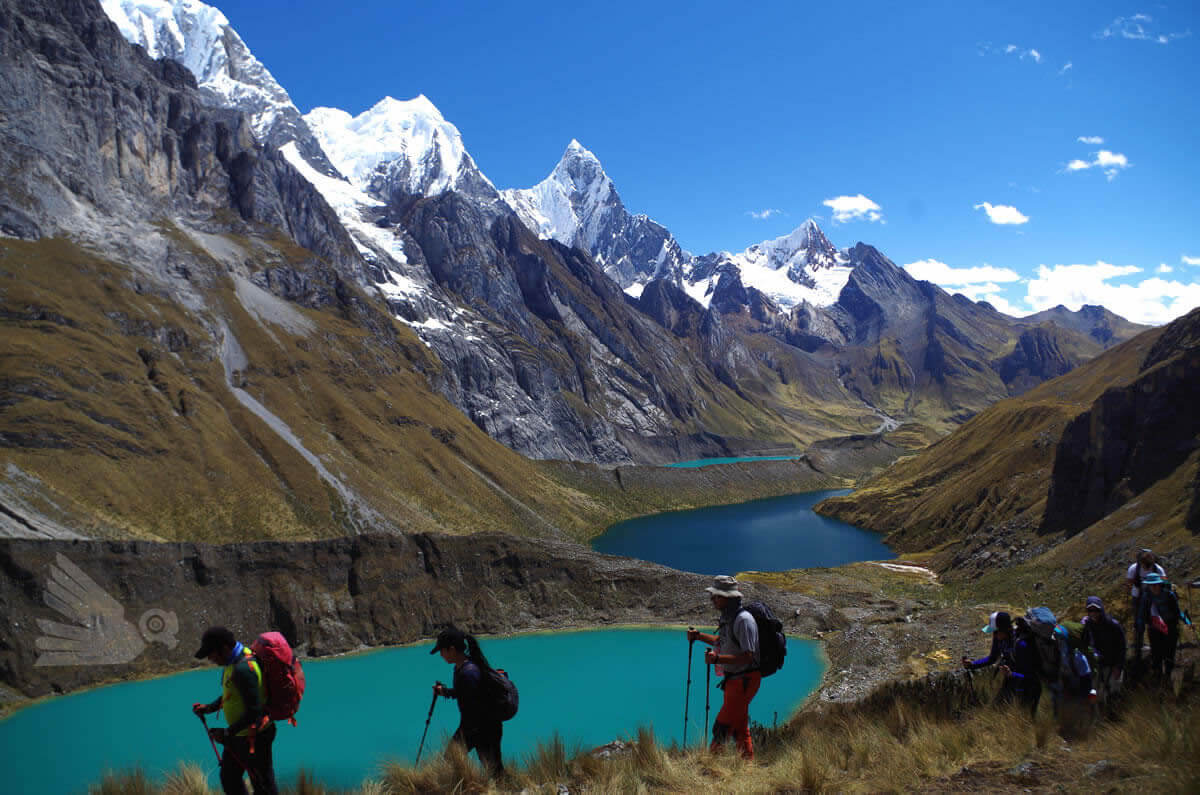 The Cordillera Huayhuash is a compact mountain range 30 kilometers in length, with six peaks over 6000 meters and dozens higher than 5000 meters. It is home to condors and at least 85 other bird species, viscachas (similar to a chinchilla), the emblematic vicuña, and 12 more species of mammals. The range also boasts trout filled streams and lakes, and being a tropical mountain range, the Huayhuash supports many plant species with at least 272 currently recorded.

The complete Huayhuash trek makes a circuit around entire range using the same paths that have been traversed by the local people for time immemorial. Many of the trekking campsites are located among the huts of the local campesinos who continue to pursue a traditional way of life based on agriculture and animal husbandry. This trek traverses regions between 3500 and 5050 meters, and due to the high elevation it is considered to be of a high grade of difficulty and not suitable for everyone. Each day, as we travel from camp to camp, we will walk an average of six hours and cross passes higher than 4600 meters.

How to get to the Cordillera Huayhuash

The city of Huaraz is located at 3100 meters in the shadow of the Cordillera Blanca and has a considerable tourist infrastructure. Most people heading to the Huayhuash travel first to Huaraz where they can organize their equipment, purchase supplies, see to last minute details, and spend some time acclimatizing before heading out on their trek. The most common way to travel to Huaraz is by bus with many arriving from Lima at different times every day. The trip from Lima is on paved roads the whole trip and lasts about eight hours. 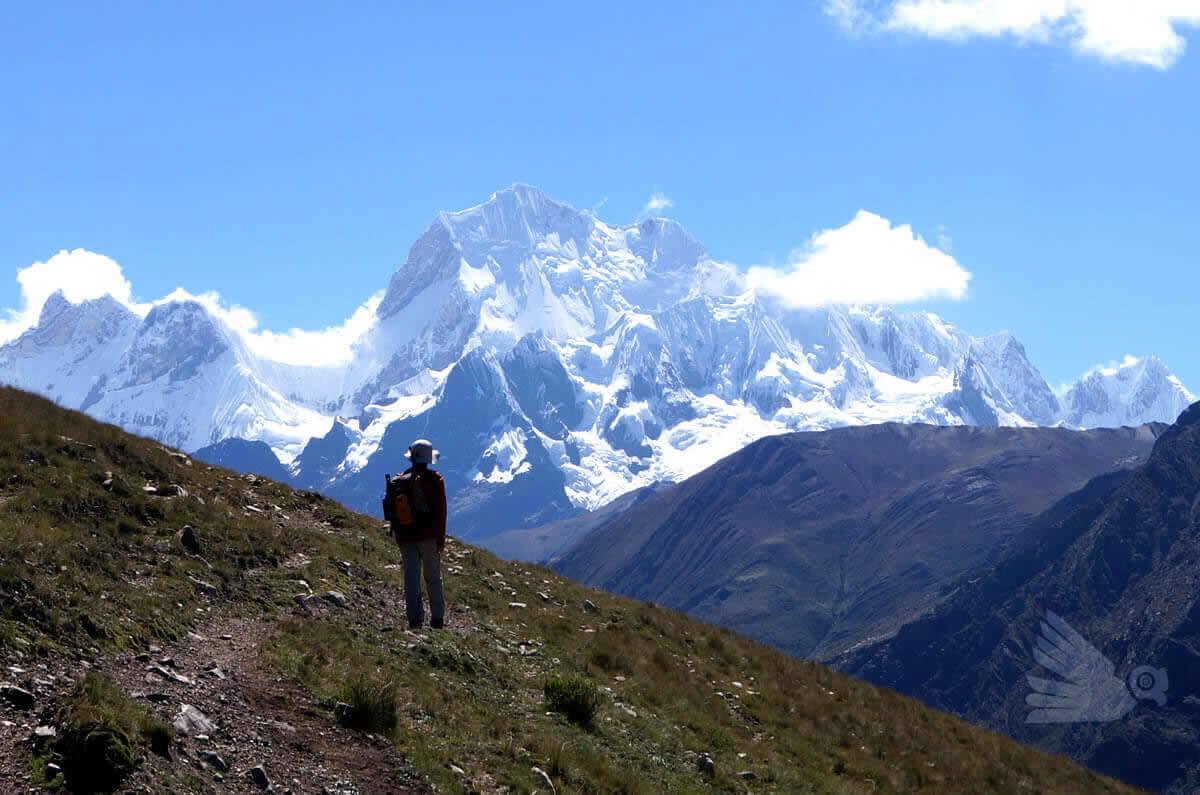 From the city of Huaraz, the closest starting point for the Cordillera Huayhuash is the campsite in Cuartelwain, which can be reached in about five hours by a private vehicle. For those who prefer to travel by public transportation, the bus company “Turismo Nazario” has a service that leaves Huaraz in a small bus daily at 5:00 a.m., and drives to the town of Chiquian in about two and a half hours. After a short stop in Chiquian it continues to the villages of Llámac and then Pocpa (3500m), arriving at this final destination at about 10:00 a.m. From Pocpa you can walk the remainder of the distance in four hours to the first campsite.

For those doing the traditional Huayhuash circuit, the finishing point is the village of Llámac. Those who have contracted a private vehicle will arrive in Huaraz in about 3.5 hours; those traveling on public transportation need to be in Llámac by 10:30 a.m. to board the daily bus, which leaves at 11:00 a.m. The public bus gets to Huaraz at about 4:20 in the afternoon.

The most practical and convenient way to do a trek in the Cordillera Huyahuash is to buy a packaged tour with a local or international agency, because these packages usually include a bilingual guide, camp cook, donkeys, donkey drivers, camping equipment, and more, depending on the cost of the trek. In this manner your only responsibility is to walk from camp to camp and enjoy the scenery.

If you are already an experienced trekker and want something more economical, you can do the trek on your own, but it is still recommended that you hire at least a pair of donkeys and a donkey driver. This way you get some help with your equipment and you have someone with you who could, at the very least, go for help in case of an accident.

If you want to make the Huayhuash trek CONTACT US, we are able to help you planning it. 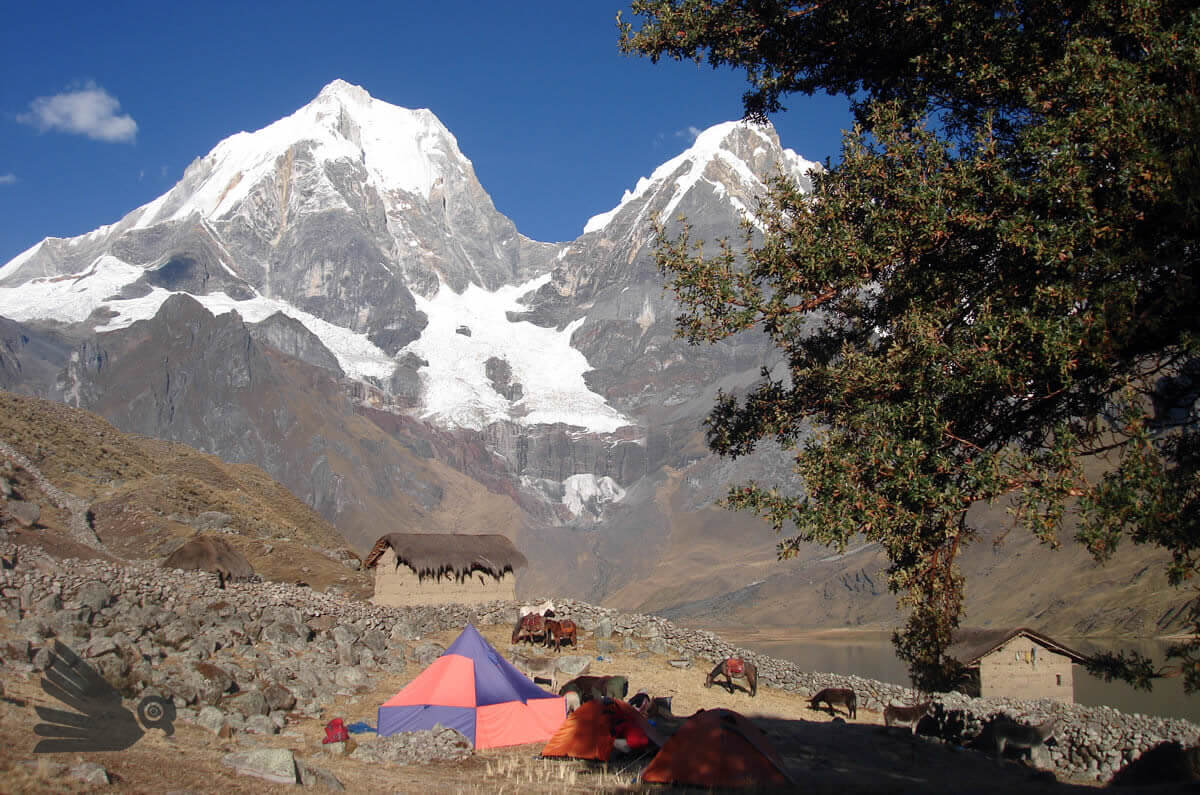 The least popular option is to do the trek carrying all your own equipment and food for the whole 12 days on your back. This is particularly difficult because there is nowhere to buy supplies until you arrive in Huayllapa on what is usually the ninth day of the trek.

Accommodations and Facilities on the Huayhuash circuit

Each night of the trek is spent in tents pitched in camping zones that have been designated by the communities who are the owners of the land. These campsites are always located near water sources, but these are not necessarily potable, so boiling or purifying all drinking water is recommended. Also, the majority of the camping areas provide restrooms or outhouses for visitors use. As you will be in remote areas with very little signage, it is recommended that you bring a good topographical map with you.

For people who would like to spend the night in rural lodging, the village of Llámac, where the trek generally begins and ends, and Huayllapa, located a few day into the trek, both offer hotels with beds, food, and sometimes hot water available.

In common with most of the Peruvian Andes, the Huayhuash region experiences only two well-defined seasons: a rainy season from the middle of October through the first days of April and a dry season conducive to trekking that lasts from mid-April until the first days of October. During the dry season, which is the best time of the year for trekking, the temperatures range from and average of 13°C during the day to about -5°C at night at altitudes around 4000m.

In our experience, May is the best month for treks in the Cordillera Huayhuash. This is because, while the seasons are still in transition and what we call the Andean summer is just beginning, there tend to be far fewer groups doing the trek and this makes for an even more impressive experience. 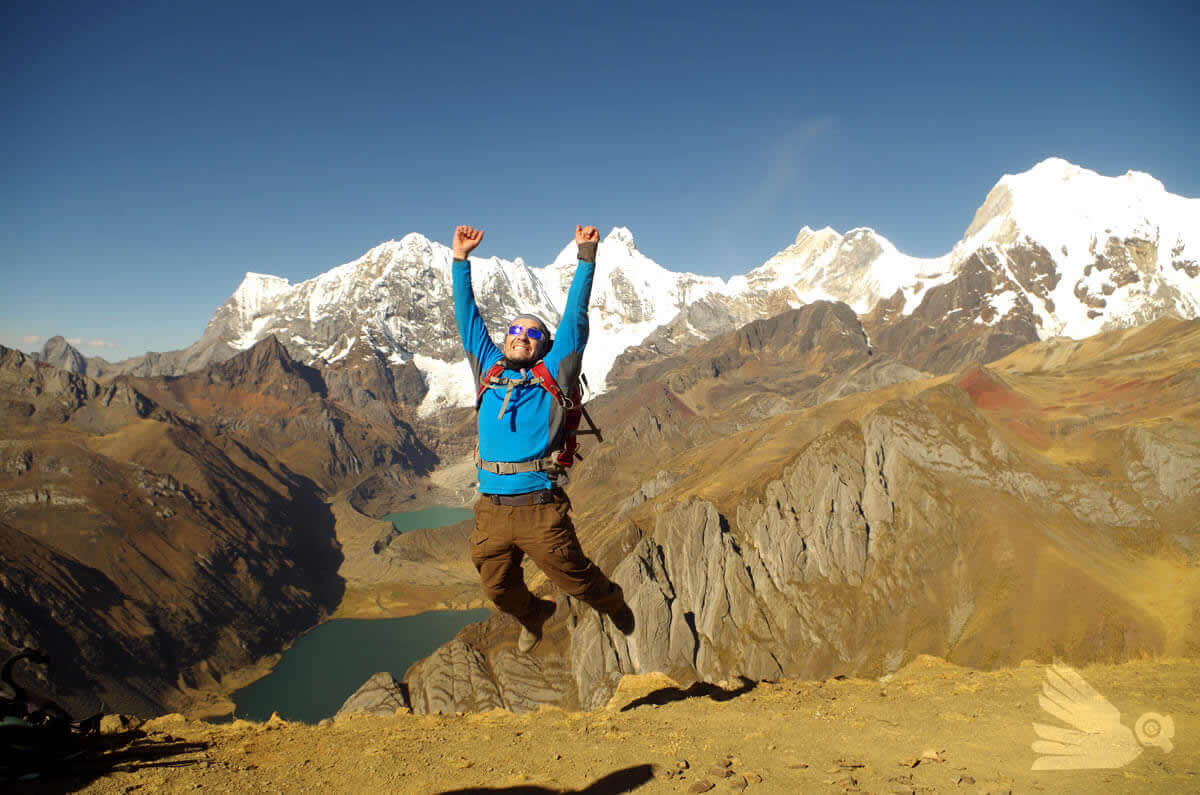 The Cordillera Huayhuash includes within its boundaries parts of three departments and the trek passes through eight campesino communities. All of the campsites are located on land owned by these communities who charge a fee to spend the night and/or pass through their region. These are the fees to visit and/or camp for 2020:

Preparing for the Trek

Due to the trek’s high altitude, it is important that you are in top physical shape, have previous high-altitude experience, and spend at least two days above 3000 meters before beginning the Huayhuash trek. In the Huaraz (the starting point for most tours) vicinity there are plenty of options for day hikes to lakes and viewpoints. These excursions usually spend the morning hiking and in the afternoon return you to your hotel to spend the night. Acclimatization hikes are generally included in tour packages, but if they are not, it is very easy to book one of the many hikes that leave daily from the various local tour agencies in Huaraz. 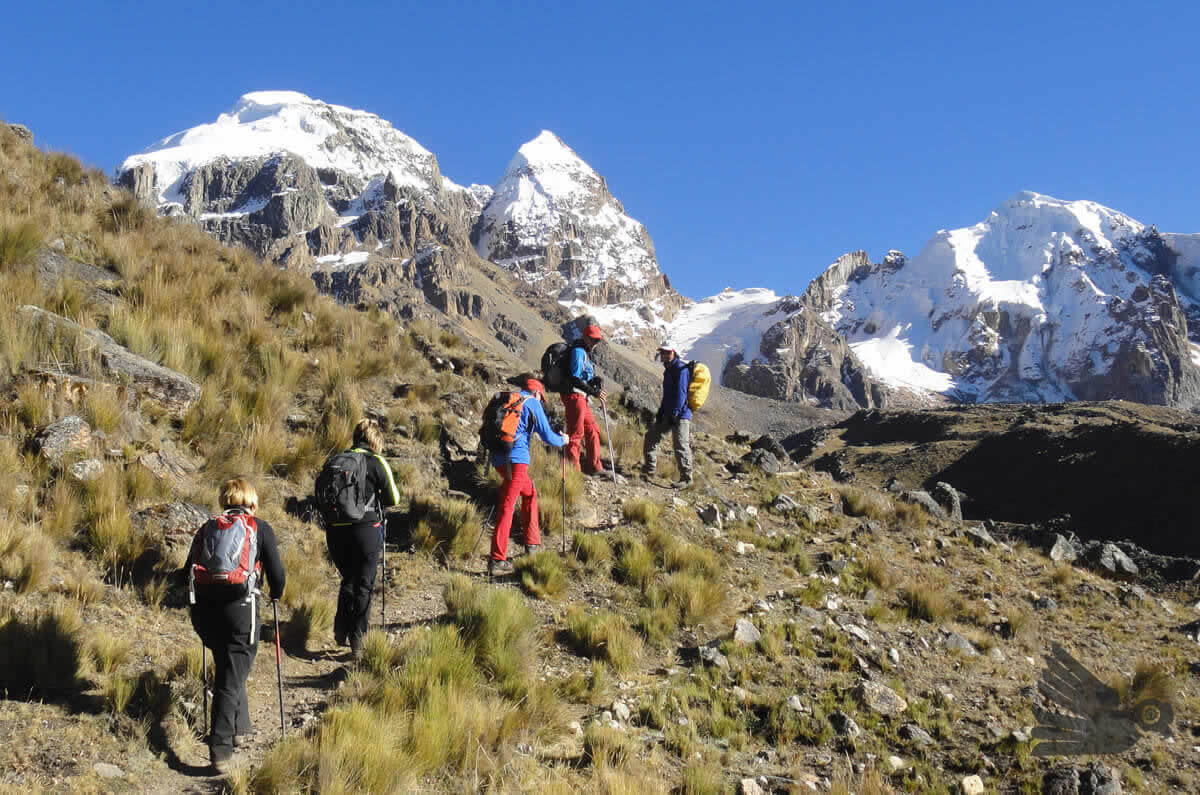 It is worth mentioning these three mountains of the Cordillera Huayhuash, because each one of them is particularly interesting.

Yerupaja stands 6634 meters tall and is the second highest tropical mountain in the world. It was considered one of the major Apus (gods) of the pre-Incan culture known as the Yarowilkas and of the Incas themselves. This magnificent tower is visible from a great distance and its 1100-meter west face remains covered by glacial ice.

Hirishanka (6090m), translated from Quechua as “the mountain of the hummingbird”, due to it’s being situated above the lake Jahuacocha, is perhaps the summit most photographed by visitors and has become a peak emblematic of the Huayhuash. Together, the mountain and the lake create a magical landscape. This mountain is also infamous as the site of a plane crash in 1959 in which 29 lives were lost.

Siula Grande (6354m) is a legendary mountain because it was the scene of one of the most epic survival stories in mountaineering history. In 1985 two English alpinists climbing the mountain via a new route had a very serious accident on the descent which required a very complicated and dramatic self-rescue. The story was recounted in a book by one of the climbers, which was later converted into a film of the same name, “Touching the Void”.

Trekking Routes in the Cordillera Huayhuash

Along the thirty-kilometer length of the range are several route options suited to different time constraints.

For those who have less than a week available, there is a route on the west side of the range. If you have another day to spare and would like to experience an ice climb, this route can be combined with an ascent of the mountain Diable Mudo (5350m), This option visits the lakes Jatuncocha and Solteracocha and also visits Rasac, where four of the six 6000 meter peaks of the Huayhuash can be observed along with a dozen peaks over 5000 meters.

If you have seven days available you can begin a trek in the village of Queropalca (3900m), which is located at the midpoint of the eastern side of the range. From here you can hike in a counter-clockwise direction with the option to visit three famous lakes, Carhuacocha, Mitucocha and Jahuacocha, and also have views of two thirds of this dramatic mountain range.

The full Huayhuash trek can be completed in as little as eight days if you hike an average of eight hours a day, but it’s not ideal because you skip some campsites and some important spots. Those who opt for the ten-day version of trek can see almost the entire range, but generally do not visit the Siula Grande basecamp. 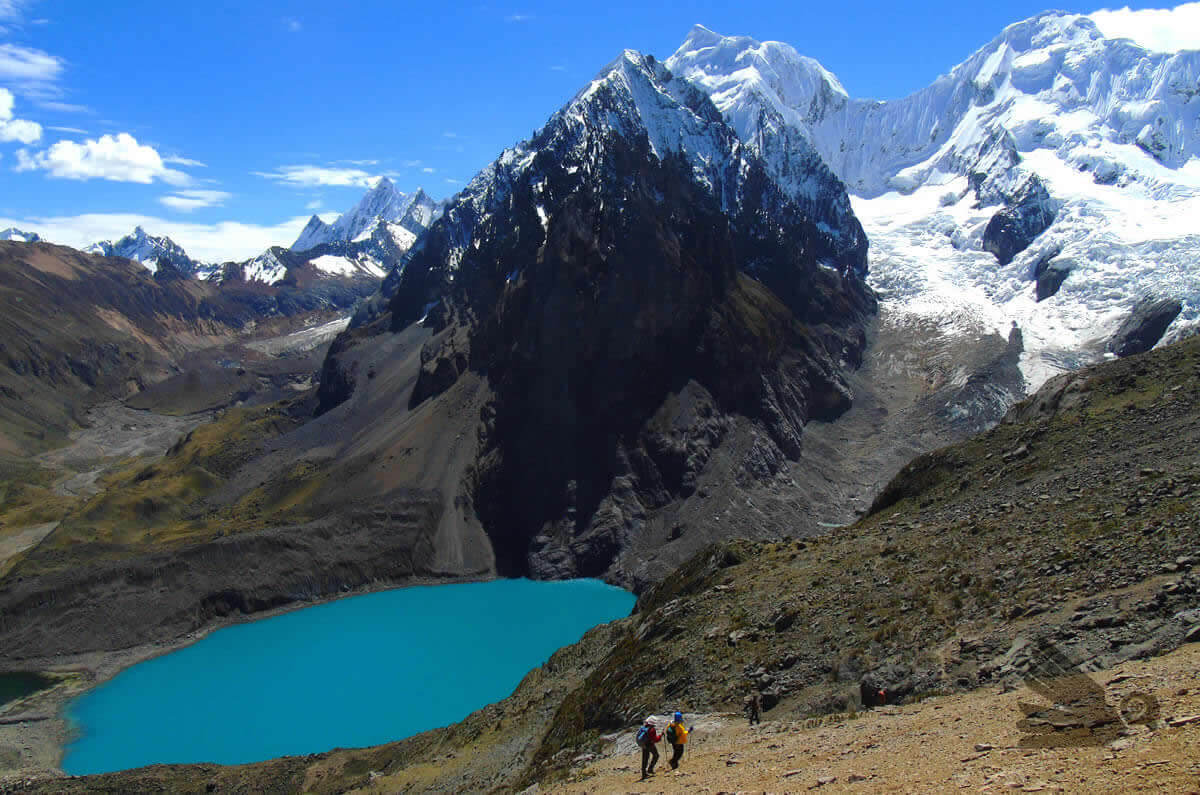 Laguna Jurau and the valley of ‘Touching the void’

The twelve-day option is considered to be the classic circuit. This version only requires an average of six hours walking each day, visits the majority of the high passes and viewpoints, allows us to explore interesting places such as the Cutatambo valley, and get an up-close view of Siula Grande, the site of Joe Simpson’s epic adventure and the movie, “Touching the Void.”

Summary of the Classic Huayhuash Circuit

Map of the Classic circuit 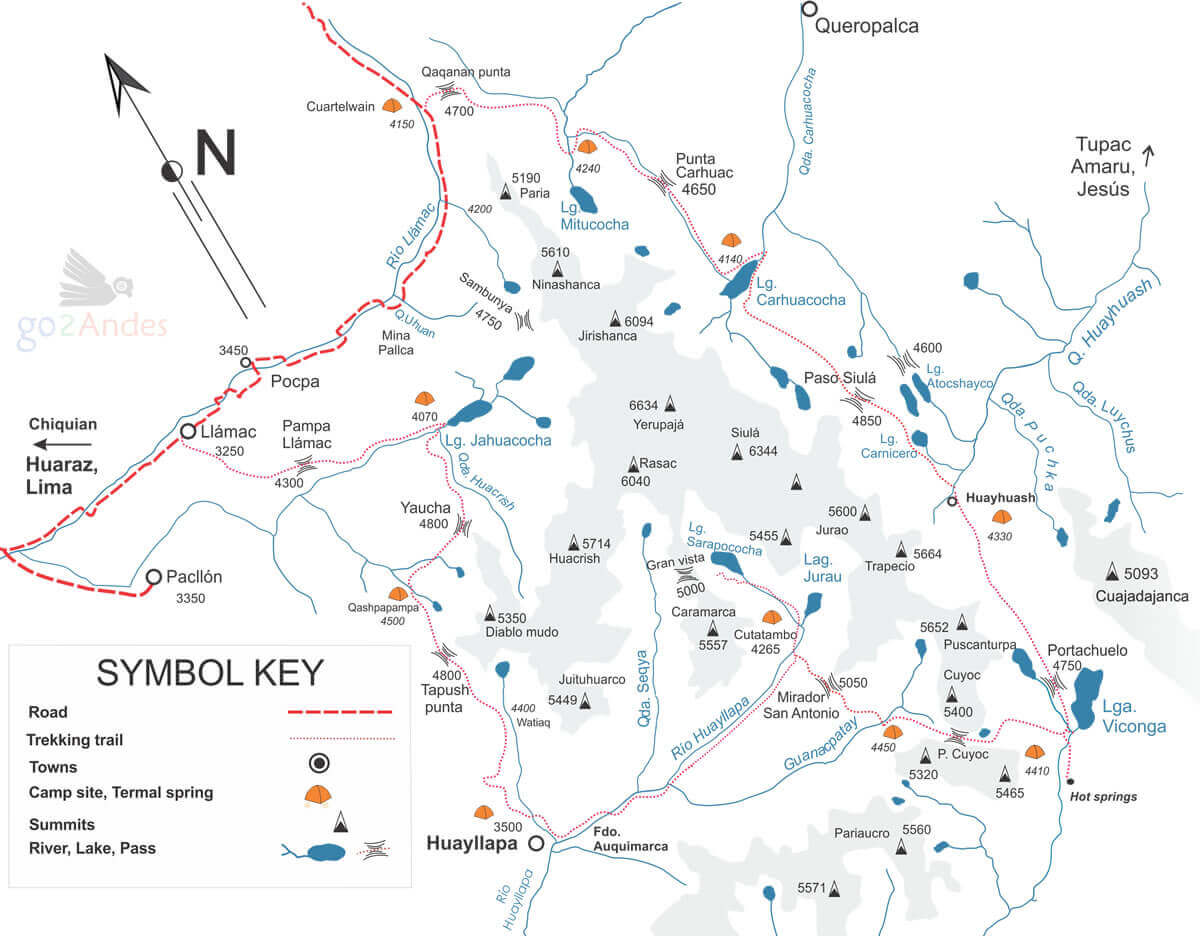 If you are going to make a trekking tour with a travel agency, they usually provide the camping equipment for collective use, such as: sleeping tents, dining tent, tables, chairs, kitchen utensils, boxes to pack the food, etc. As part of the personal  equipment for the 12-day tour we recommended to take the following: